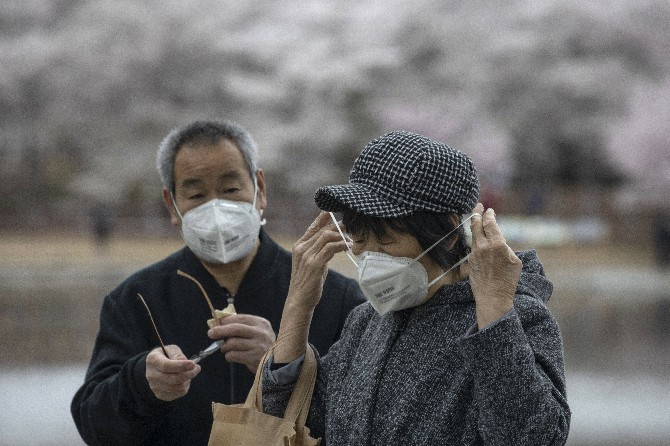 Following news reports of the emergence of Macau’s first serious case of Covid-19, health authorities yesterday fielded questions from journalists seeking to better identify the most vulnerable parts of the population.
Although everybody is at risk of becoming infected by the novel coronavirus, the elderly and those with chronic health conditions are most vulnerable, said Lo Iek Long, medical director of the Conde São Januário Hospital (CHCSJ).
The doctor was asked which groups of people should be more vigilant where Covid-19 is concerned. Citing data from the previous months of the outbreak, Lo explained that there are several factors that influence the severity of infection.
“Generally speaking, age is one factor,” the doctor said. “People above the age of 60 are more prone to severe symptoms.”
Lo said the risks of severe infection and mortality are greater in this age group. People with chronic illnesses should also be more rigorous in terms of health management.
“For instance, patients with diabetes, organ failure or cancer are at higher risk of severe symptoms [from Covid-19],” the doctor explained. “Early treatment, on the other hand, may be a factor in stopping [people] from deteriorating.”
Besides the government hospital, the local Center for Disease Control and Prevention (CDC) also reminds people living in Macau to remain vigilant. As the director of the Health Bureau (SSM) previously said, “The next wave [of infections] could be more impactful than the last one.”
The SSM recently transferred 26 people from the Public Health Clinical Center to the Island Medical Complex’s Nursing College Building. The 11th to 15th floors of the building are being used as Provisional Quarantine Center. There are 192 beds in 96 rooms.
The location will be used to host close contacts, persons considered to be of high risk and patients undergoing recovery quarantine. Lo stressed that these actions do not indicate an expected boom in new cases, but the relevant authorities wish to make early preparations in order to avoid any disorganization in the instance of a rapid increase in infection numbers.
Another breach
of house quarantine
The Public Security Police Force (PSP) reported yesterday that it received intelligence about a breach of home quarantine on March 27. The investigation revealed that quarantined residents had left their residence more than once while they were still supposed to stay within their homes.
The PSP managed to speak with the two people living in the residential apartment. The duo admitted that on three instances they left the apartment and proceeded to the main entrance of the building to fetch resources delivered to them by their family members. However, they said that they had remained in the apartment the rest of the time. Although they had a reason, they were still suspected of violating the Contagious Disease Prevention and Control Law and have then been transferred to a designated hotel for another quarantine period.
As of yesterday, the PSP had recorded a total of seven cases of such violations.
The PSP disclosed that due to the new measures in neighboring Guangdong province, 21 Macau residents are currently undergoing mandatory quarantine in Zhuhai.

Overseas residents need
to consider risk of return
The Macao Government Tourism Office (MGTO) has recommended that Macau residents currently abroad carefully evaluate the necessity of returning to Macau.
The special consensus made between the Special Administrative Regions regarding the transfer of Macau residents from Hong Kong International Airport to the MSAR will end today. Under the consensus, Macau residents stopping over in Hong Kong on their way back have been sent to Macau via coaches chartered by the local government.
MGTO representative Inês Chan said, “they should evaluate whether coming back or staying [overseas] is less risky.”
The SSM director added that the flight can be a risky part of the return journey.
Once they have decided to come back, residents should search for routes that fly directly to the Macau International Airport, removing the need to transfer in Hong Kong.

Hong Kong roamed
Macau for days
One of the cases confirmed recently in Hong Kong had been in Macau for several days right before her diagnosis. During her stay in Macau, she was in the central business district and Cotai, with visits to Jollibee, Haagen-Dazs and the Roadhouse at Broadway Macau. Although all the outlets have been instructed to sanitize the premises, the SSM reminds members of the public to remain vigilant.