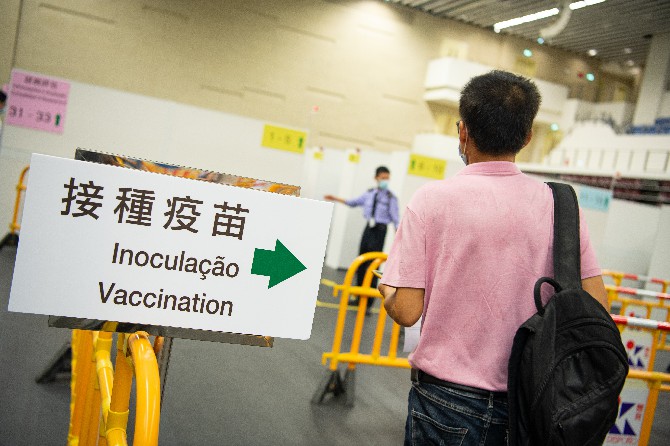 Several legislators-elect and election candidates have called on the government to reconsider its latest guideline which is causing a lot of trouble to the working population. Legislators-elect Ron Lam, Ella Lei and Leong Sun Iok, as well as a past election candidate, Angelo Choi, are among the firsts to take actions.
The latest guideline issued by the government requires literally all workers to either get vaccinated or a negative Covid-19 polymerase chain reaction (PCR) test result at least every seven days.
It was not well-received by the public.
Lam stressed that the Association of Synergy of Macao, the group he leads, has agreed with the idea that vaccination is the only effective method against Covid-19. However, he pointed out that objective scientific data is the key to promoting and encouraging inoculation. “But the premise is that it must be voluntary and come with options,” Lam said in a statement.
In the name of his association, the lawmaker-elect pointed out that the guideline did not support the requirement with sufficient scientific data and reasons.
“Because the identification of concerned groups of workers is vague, […] it has become de-facto pushed inoculation, which is not scientific,” Lam commented. “It is not only helpless in lowering ‘jab hesitation’, but has also […] stimulated greater disgusts and fear against the vaccine.”
He also referred to a recent comment by the National Health Commission (NHC), which described the implementation of restrictive measures to achieve vaccination boost is in violation of the national principle of “informed, consented, voluntary and pragmatic vaccination.”
Meanwhile, Lei and Leong, both leaders in the Macao Federation of Trade Unions (FAOM), said in a statement that they have met with the director of the Health Bureau (SSM), Dr. Alvis Lo, and expressed workers’ concerns over the restriction of the new guideline.
The duo pointed out that although the guideline does not come with a suggestion on compulsory vaccination, they had already received feedback from local workers, including civil servants, and some government bureaus or departments who over-interpreted the guideline and started requiring specific groups of individuals to take the vaccine before joining any activities hosted by the entities.
Lei and Leong also requested the SSM’s head to streamline arrangements for groups that are proved medically unsuitable for the vaccine. They also called on the government to waive the PCR test charge on these groups of individuals.
On Tuesday, the Public Administration and Civil Service Bureau issued a notice to all civil servants, requiring them to, starting from September 27, take a PCR test every seven days in their own time, unless they are fully vaccinated by then.
Choi interpret this as working overtime. In addition, he also appeals to the NHC to comment on the voluntary nature of Covid-19 vaccination.
On the other hand, former lawmaker Agnes Lam posted a voice recording on her social media page. The recording was said to be from a civil servant help-seeker who is a breastfeeding mother.
She revealed that there is a group of breastfeeding mothers facing the same situation. She noted that they hoped the government could address the abruptness of the new requirement.
The voice in the recording said that last Friday, they saw on the SSM’s website about the inaptness of the Covid-19 vaccine on breastfeeding mothers. However, two days later, they got the information that the vaccine is suitable for such mothers.
“We don’t know what to do and don’t understand why there’s such a change,” the recording revealed. “Can the implementation of the guideline be deferred?”
The voice stressed that they are worried about the potential impact on their babies after taking the mother’s “vaccinated” milk.
The Times has attempted to obtain a comment from incumbent lawmaker José Maria Pereira Coutinho, who has been positioning himself as defender of civil servant rights. No reply was received by press time.