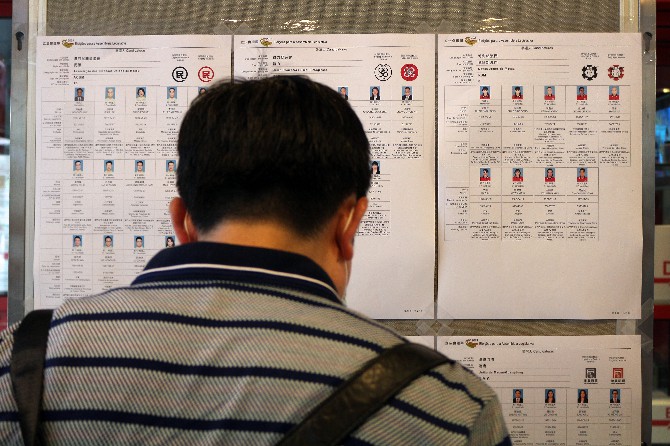 The Legislative Assembly Electoral Affairs Commission (CAEAL) yesterday published the 24 lists that are running for seats in the seventh term of the Legislative Assembly (AL), which will start later this year and run until 2025.
Across the 19 lists running in the direct elections and the five running for the indirect sectorial election there are not many surprises, although some lingering doubts have now been clarified.
One of the most noted revelations is the confirmation of the retirement from political life of the candidate who won most votes in previous elections, Mak Soi Kun.
This fact, foreshadowed by Mak’s absence at the presentation of the Macau-Guangdong Union (UMG) list to the CAEAL, as well as at the announcement of the candidate list and political platform, is now confirmed with Mak’s name removed from the candidates’ list.
The retirement of Mak results in the promotion of the second candidate from 2017, Zheng Anting, who now leads the list.
As second candidate for this year’s election, UMG presents a new face, Lo Choi In: a banking industry staff member. UMG’s third candidate is another woman, an architect named Lao Ka U.
It was also confirmed that the former New Macau Association member Scott Chiang will head the Association for Prosperous Democratic Macau’s (APMD) candidate list, pushing the incumbent legislator Ng Kuok Cheong into the second position. Candidate number three of the APMD list is another new face: an Information Technology professional, Leong Pok Man.
An election veteran from the democratic camp, Paul Chan Wai Chi, is once again running for an AL seat. Although Chan has attempted this several times, this year will be the first time that he is running as the lead candidate for the New Macau Progress Association (APNM), another of the lists representing the pro-democracy camp.
Lei Kuok Keong, who ran with Chan in two previous elections, is running as number two on the APNM list. In 2013, he was part of incumbent lawmaker Ng Kuok Cheong’s list. In 2017, Lei joined forces with Sulu Sou at the Association of the New Progress of Macau (ANPM).
With Paul Chan running on his own, the ANPM list led by incumbent lawmaker Sou has promoted Rocky Chan, one of the most active members and vice president of the New Macau Association, to the number two spot.
Incumbent lawmaker Agnes Lam, is running with an almost completely new list. Lam, who heads the list of the Civil Watch, continues to court votes from the professional sector. Her name is followed on the list by physician, Zhao Yunqiao and engineering consultant, Chu Kar Kit.
In the indirect elections, the only news is the inclusion of former directly elected lawmakers Angela Leong and Ho Ion Sang on the indirect election lists.
Ho is running as sole candidate of the list of the Association for the Promotion of Social Work and Education [Associação de Promoção do Serviço Social e Educação] (APSSE) for the seat hitherto occupied by lawmaker Chan Hong.
As for Leong, she will be joining Chan Chak Mo running under the sports sector through the Rising Sun Cultural and Sports Union [União Cultural e Desportiva Sol Nascente] as candidate number two.
Leong’s position arises from the promotion of Chan to the first candidate after the retirement of lawmaker Victor Cheung Lup Kwan, notorious for having the worst attendance record of all lawmakers at AL sessions, including the plenary meetings.
The 19 lists for direct election comprise 159 candidates in total, competing for the 14 directly-elected seats; while an equal number of candidates compete for another 12 seats in the indirect elections.
According to election regulations, the trustees of each candidate list can make last-minute amendments to the current lists until Friday, July 9.
The final list of the elections will be published on July 26.