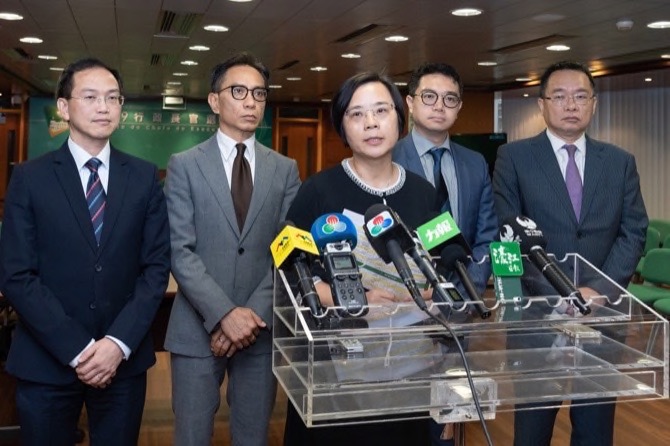 The Electoral Affairs Commission of the Chief Executive Election does not wish to comment on the city’s sole-candidate election, particularly regarding suggestions of establishing a limit to the maximum number of nominations from the election committee in future elections. The position was made clear by Song Man Lei, president of the commission, who made the declaration to the media on Friday.

Previously, a total of 14 people, including Ho Iat Seng, the former president of the Legislative Assembly (AL), had obtained election application forms. However, Ho earned 379 nominations and, in denying his competitors sufficient support from the remaining 20, became the sole candidate in the fifth Chief Executive election.

According to Macau’s Chief Executive election rules, a person can only be confirmed as a candidate if they collect 66 nominations from the committee’s 400 members, who can each only nominate one candidate.

Song was asked to comment on the sole-candidate election, and on whether the commission would consider setting a limit on the maximum of nominations, or whether an election committee member can nominate more than one candidate, therefore increasing the chance of having more candidates.

“One person supporting one person is the normal situation. Who they choose to support is the decision of the committee member, and nobody can force [anybody to do] that,” said Song.

Regarding a limit for nominations, Song noted that it is a matter of the legal system and that she has no more comments on changing the existing system.

Previously, candidate Chan Weng Fu had made a complaint before the announcement of Ho’s candidacy, reporting that the Electoral Affairs Commission was in favor of Ho, and that this was unfair to the other election candidates.

Song said that despite having received Chan’s complaint, she did not give it a direct response. She only said that there was a delay in receiving the complaints, and that the commission adopts a neutral position on all candidates and in this way avoids having a preferred candidate.

The commission also reported that Kevin Ho had completed his registration as a member of the Chief Executive election, bringing the total number of election committee members to 400.

Between August 4 and 9, election committee members can claim their vote rights certificates. Only those in possession of a certificate can participate in the candidate’s political platform symposium on August 10 and the election on August 25.

Former Chief Executive election contender Hoi Weng Chong – known to the public as the ‘Yellow Man’ or sometimes ‘Fighter in Red’ because of the colorful outfits he is known to wear at his solo protests – went on a two-day hunger strike as a way of expressing his opinion that the election is a “black box operation.”

Hoi started the hunger strike on July 31, according to reports from local Portuguese media, when he submitted his petition to the media in front of the Public Administration Building.

“Starting from today, I will start my two-day hunger strike,” Hoi’s petition read. In addition, Hoi filed a complaint to the Commission Against Corruption against Ho Iat Seng.

“Ho Iat Seng submitted 379 nominations. Isn’t this a ‘black box operation’ leaving no chance to other runners?” Hoi questioned, using a Chinese expression to describe the process as concealed or opaque.

Hoi pointed out that in the fifth Chief Executive election, all the candidates, except Ho, had no chance to seek support and express their political platform to election committee members.

“The Chief Executive election is held every five years. To Macau people, the election is a meaningful event. But other runners can’t even announce their political platform, not to mention, the election leaves these runners in a disadvantageous position,” said Hoi.

On July 16, Hoi visited the Commission Against Corruption to request an immediate investigation on Ho, in particular, regarding his Portuguese nationality when he was simultaneously the AL president and a Macau delegate at the National People’s Congress and the Chinese People’s Political Consultative Council.