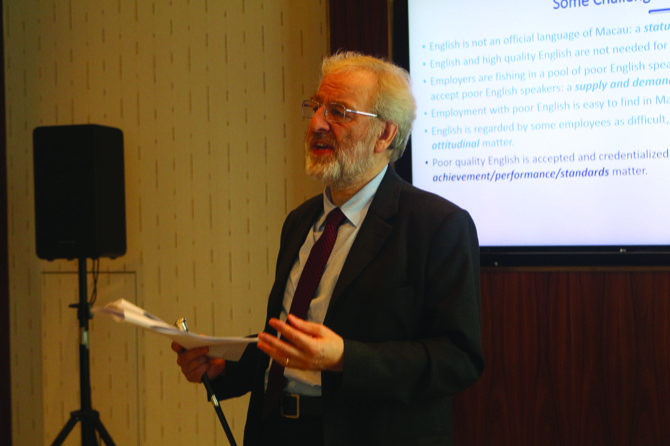 Speaking at yesterday’s breakfast talk of the British Business Association of Macao, titled “Rewiring Macau’s English – Problems of non-native English speakers,” the scholar argued that Macau still faces problems when it comes to English proficiency, and called for a shift in teaching methodology.

Although some schools in Macau benchmark their English modules, many are still inhibited by over-reliance on textbooks.

“Then they use [textbooks as], though they are given the required knowledge, they don’t get the opportunity to practice, to generate their own English,” Morrison told the Times.

Morrison suggested that institutions should require students go beyond program requirements by speaking more English and fostering a reading culture, instead of recycling fill-in-the-blanks templates from textbooks.

He said that some schools have poor methods of teaching and assessing English skills, adding that there is an over-emphasis on grammar-translation and template-based approaches, which could lead to the lack of self-generated English by students.

“We still need grammar – but it’s a question of how much. If we fill the language curriculum at the moment with all of that, something suffers in communication,” Morrison explained.

Questioned whether the Education and Youth Affairs Bureau (DSEJ) and Tertiary Education Services play a significant role in changing the language curriculum, the educator stressed that institutions must be more honest in assessing students and their own standards. He added that there are a number of students in Macau who have graduated high school with minimal English skills.

Although DSEJ has a language curriculum, students may not retain what they have learned.

Morrison said low standards of English are “set, accepted and qualified” in higher education here and there is a lack of external benchmarking in English.

The scholar said similar situations happen abroad. He cited the example of U.K. universities which require applicants to score at least 6.5 in the International English Language Testing System (IELTS) examinations but still admit students who fail, provided that they develop the necessary language skills within a year.

He said universities need to re-assess students’ graduation requirements when several modules require a certain standard of performance in English.

Morrison also added that some business operators could assist residents in improving their English skills. He suggested that employers could provide compulsory English training within office hours, with “external standards to be reached and incentives offered.”

Another challenge is that good English is not needed for many jobs in Macau. Morrison remarked that local employers have no alternative but to fish from a pool of poor English speakers.

According to the educator, Macau may stay in this relatively poor position compared to other regions, which place more emphasis on English.

“We see many documents which will be very helpful for local [English-speaking] residents to have translations in English, and it’s not provided because it’s not an official language. I think they need to broaden their view there. If they are genuine about [improving] English then more steps need to be taken,” said Morrison.

He added that Macau needs to raise its English proficiency for the sake of international trade, lest it eventually impact the city’s image.

“If businesses from overseas engaging with Macau find [the] level of English questionable, that could hamper the image,” Morrison concluded.