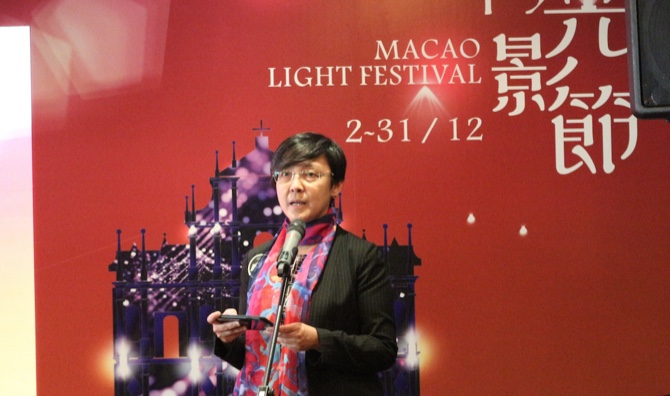 The Macau Light Festival 2018 will feature new highlights including the “Food Truck x Light” and Gastronomy Night Market, along with the Cultural and Creative Night Market.

Themed “Time Travel in Macau,” the festival will present a series of projection mapping shows, light installations and interactive games from December 2.

In a press conference organized by the Macao Government Tourism Office (MGTO) yesterday, it was announced that five projection mapping shows will be staged at three locations, and an itinerant projection show at the Taipa Municipal Market, showcasing the diverse cuisines of the city.

Three projection mapping shows produced by their respective teams from Portugal, Belgium and Macau will take place at the Ruins of St. Paul’s at different periods.

Two other projection mapping shows are created by local production entities: “Flashing Macao” at St. Dominic’s Church and “Search for the Taste of Memory” at the square in front of Pak Tai Temple, which will feature local dining culture and habits in different decades.

Display of the VR game “Fly over Macau”

Between 7 p.m. to 10 p.m. until December 31, the festival will include local elements of gastronomy, humanity, architecture, culture, and creativity.

The Light Festival will have three themed routes this year, covering 11 locations across the city’s five districts.

The third route “Taste Time” passes through the Taipa Houses and new locations including the Taipa Municipal Market, Pak Tai Temple and the square in front of the temple.

Commenting on the budget, MGTO director Maria Helena de Senna Fernandes said that there was an increase of 2.5 percent compared to last year.

“This year’s budget, including the costs of production, which were in open bidding, and the fees for the overseeing production team, is MOP18.5 million,” Fernandes told the press.

The event will feature its first cultural and creative night market at Anim’Arte Nam Van.

In addition, Outdoor Local Concert will be staged on Fridays, Saturdays and Sundays, in a bid to exchange opportunities in the field.

The event will also present interactive games including the “Nostalgic Hopscotch” at Largo do Pagode do Bazar, the “Future Mailbox” at Calçada da Igreja de S. Lázaro and “Fly over Macau – VR Experience” at the Nam Van Lake Nautical Centre.

Other illuminations and interactive installations include “Space-Time Hot Air Balloons” spreading across the Nam Van Lake Nautical Centre and “Wall of Times”, which will introduce the transformation of culinary culture in Macau at the Taipa Houses.

The surge in the number of visitor arrivals from mainland China is a significant factor as to why the Macao Government Tourism Office is expecting a nearly 8 percent increase in the city’s tourist arrivals, up by 3 to 5 percent compared to its initial forecast earlier this year.

Speaking on the sidelines of The Macao Light Festival press conference, MGTO director Maria Helena de Senna Fernandes said, “We will still maintain [the forecast of] probably an 8 percent increase, which will take us up to 35 million people.

Commenting on whether there is an increase in the number of visitor arrivals coming from the Hong Kong-Zhuhai-Macau Bridge, the official said that both public and private sectors still need time to adapt to the opening and how it impacts the city’s way of doing businesses.

Meanwhile, Fernandes said that the bureau is set to conduct research on the use of the bridge, after a month of its official opening to the public.

“We’re looking at starting […] to do some research into why people are using the bridge and why people are not using it, […] so as to get new insights into how to market and how to do our work better in the future,” said Fernandes.

“I think we need to know in terms of the habits, after the novelty factor, what the actual habits of people are and how to better manage the ways that people access Macau,” she added.