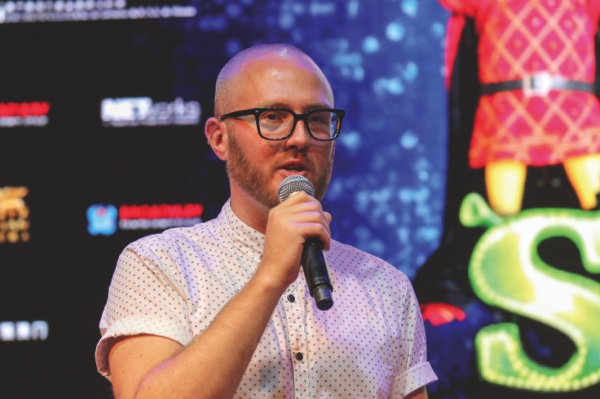 The cast and crew of “Shrek the Musical” were part of a media event held yesterday anticipating the show’s debut set for the coming July 22.
A “sneak peek” of the show was presented during the event at The Venetian Macao. Tour manager Justin Scholl, Kyle Timson (Shrek) and Christian Marriner (Lord Farquaad) were some of the guests that attended the event.
Tour manager Justin Scholl – visiting the territory for the second time after his role in the musical “Beauty and the Beast” – disclosed part of the story of the production, which started back in 2008 on Broadway and is now touring the world. The show is passing through Macau after Jakarta, Indonesia. Scholl is pleased with the reception from the Asian audience.
“We are really hoping that the Macau audience will continue that great energy that we have started off [in Jakarta],” Scholl said.
In terms of the most challenging part of putting such a tour together, Scholl cited the need to “create a home away from home for everybody,” adding that “experiencing all the different cultures and countries” compensates for the long hours of travelling.
Another aspect of the show that he highlighted is the localization of the tour to the place where it is being presented, featuring a few “local inputs” in words, expressions or even local artists and/or celebrities. This reminds the cast and crew that each local leg of the tour is backed by about 200 people that help to “put on the show every day.”
Comparing the musical and the famous movie, Scholl explained: “We picked up the 90-minute movie and extended it to…two hours and 30 minutes. That gives us time and space to explore deeper details and connections of the story and namely where Shrek and Fiona came from. It’s a little more investment in the characters.”
Christian Marriner, who plays Lord Farquaad, faces the added challenge of being four feet tall on stage (approx. 1.22m) while being six feet tall (1.83m) in real life. For the “stunt”, he acts on his knees with the help of special rigging gear.
The performer says the most fun part of playing Farquaad is “the interaction with the audience”, as he gets the chance to improvise in some parts and speak “local languages in the dialogues.”
Both Marriner and Timson emphasize that “this is not the usual fairytale” and that the story carries a very important message that “it is OK to be different and in fact, that is [normal].”
Timson, who plays Shrek, states that the story is really about “acceptance”, adding “what the show is trying to bring across is that even things that look evil or monstrous at the first sight have good and bad feelings in them. It’s a metaphor for the real world, where the ogre represents just the fact of being different or acting differently, and that people should look for deeper feelings in the people they cross [paths] with”.
The stage production by Broadway Entertainment Group FZ LLC and NETworks Presentations, LLC., will play at the The Venetian Macao this summer from July 22 to August 7. 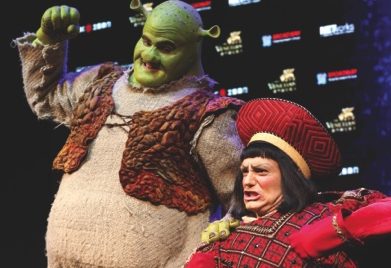