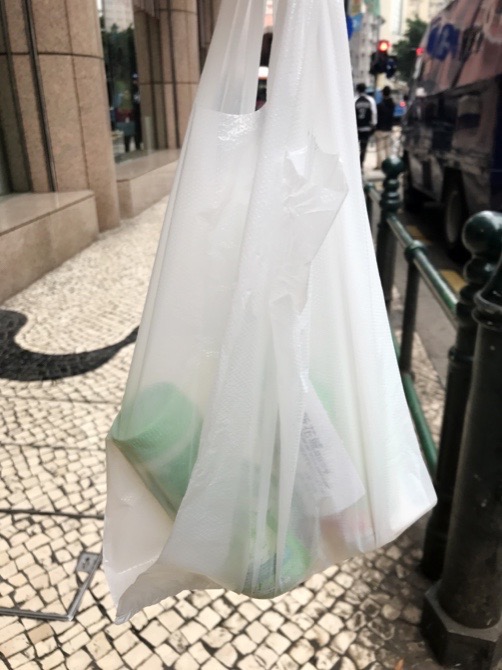 Presented by the government in the form of a tax, the plastic bag distribution surcharge for the retail industry is, in fact, more like a subsidy for retailers. Still, the government expects to reduce the use of such items by at least 50 percent right after the implementation of the bill, which was presented yesterday by the Executive Council (ExCo).

At a press conference held at the government’s headquarters, ExCo spokesperson Leong Heng Teng presented the main features of the proposal, which stipulates that retail establishments should begin charging a fee for plastic bags that are requested by customers.

The amount to be charged is not clearly stipulated in the bill in order to allow it to be updated if needed through a simple Chief Executive order, Leong explained. The Director of Environmental Protection Bureau (DSPA) Raymond Tam added that “at the time of the public consultation, it was suggested that the amount should be 1 pataca, and that suggestion gathered a lot of favorable opinions and consensus.”

When questioned as to whether it was, in fact, a tax that should go back to the government or an amount that would be kept by the shop owners, Tam said, “The money will go [to] the retail shop. We think this is most adequate for the Macau situation and a way to support the sector,” noting that most of the neighboring regions and even some countries around the world have opted for the same system.

Tam also noted that with this bill, the government aims to take “the first step” in the restriction of single-use materials, noting, “other measures will follow in future, with restrictions to be enforced on other materials,” without further specifying any proposals in mind.

“Besides this law proposal, we are committed to the work of reducing other single-use materials,” said Tam, revealing that in 2017 plastic waste was responsible for 23 percent of all waste collected, and of that, 13 percent constituted plastic bags.

The DSPA director also noted that his bureau has been trying to enforce measures to reduce plastic waste, especially concerning public entities, which have already achieved some success concerning the use of water dispensers instead of bottled water in several public services, for example the Sports Bureau.

According to statistics cited by Tam, plastic bottles constituted a total of 2 percent of all the waste collected in 2017.

The bill also establishes exceptions, allowing retailers to supply plastic bags free of charge in cases where the products to be bagged are unpacked or fresh food products such as fruits, vegetables, meat and fish, as well as unpacked medicines and products subject to security measures of cabin transportation in restricted areas of the airport.

Once again, when questioned as to what extent this law would contribute to the reduction of single-use plastic bags, Tam said, “we would say at least 50 percent after the enforcement of the law. But this is a conservative estimate. From the experiences collected by neighboring regions such as China, Hong Kong and Taiwan, they have all achieved a reduction rate of about 80 percent.”

The bill, which is now being forwarded to the Legislative Assembly to start the procedures of discussion and approval, will have a transition period of three months after its publication before it is enforced.

In case retailers are found failing to comply after the period, the law establishes fines ranging from MOP1,000 to MOP10,000 to be applied to the perpetrators.