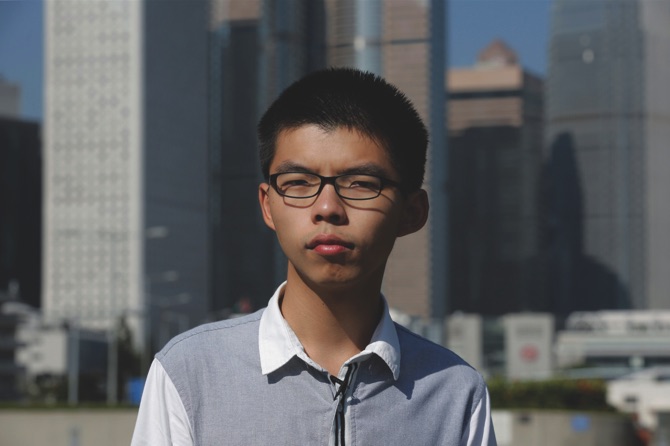 He was responding to questions about his expectations for an upcoming Asian tour by President Donald Trump, who will visit China and four other countries.

The 21-year-old, Hong Kong’s most famous activist, is out on bail while he appeals a prison sentence related to his involvement in massive 2014 pro-democracy protests.

“Business interests override human rights,” he said in an interview with The Associated Press. “It unfortunately seems to be a common trend in the world” under a rising China.

During Trump’s Asian trip, he said there’s likely to be “a lot of uncertainty. No one can expect what will suddenly be published on his Twitter.” But he urged Trump to not let human rights lose out to commercial considerations, hinting that U.S. business interests could also someday be directly affected by China’s rising clout.

As an example, he referred to the recent case of British human rights activist Benedict Rogers, who was barred from entering Hong Kong on what many suspect to be Beijing’s request, and said it might happen again.

“The day may come for U.S. politicians to be blocked from entering Hong Kong and when politicians or businessmen from the U.S. might not be possible to enter such an international financial center, how can they keep silent on the erosion of Hong Kong autonomy?” he said.

Beijing promised to let Hong Kong maintain wide autonomy and civil liberties after its 1997 handover from Britain under the “one country, two systems” blueprint, but pro-democracy activists and lawmakers fear that China’s communist rulers are reneging on their promises.

Wong urged the U.S. and other Western countries to pay closer attention to “how the China model threatens Asia-Pacific stability.”

The China model is a reference to economic development without corresponding democratic reforms as well as the name of a controversial booklet praising China’s one-party rule the Hong Kong government planned to distribute in 2012 to schools as part of “moral and national education.” Wong helped lead protests forcing the government to shelve those plans.

Wong was given bail last week, two months into a six-month prison sentence. He and a fellow activist, Nathan Law, were both sent to prison after the justice secretary won a legal challenge overturning more lenient sentences. The move sparked fears Hong Kong’s independent judiciary was under threat. They’re due in court Nov. 7 to appeal the sentences.

Wong, who is also awaiting sentencing for another case, is prepared to go back to jail. He turned 21 while behind bars and said it “might not be the last time I will celebrate my birthday inside prison.”

During his time behind bars, Wong had to do compulsory marching exercises 30 minutes a day and ate with a spoon because forks, knives and chopsticks are banned.

Not being allowed a phone he couldn’t update his popular social media accounts but Wong said being unplugged allowed him the opportunity for “spiritual reflection.” Prison news was limited to Hong Kong’s pro-Beijing publications, but he read books such as “I Am Malala,” by 20-year old Pakistani activist Malala Yousafzai.

Out of prison, he is making the most of time, hanging out with his parents and girlfriend, playing video games and enjoying favorite local foods like Hong Kong-style milk tea.

Wong plans to keep fighting for full democracy in Hong Kong. In the short term, he said his political party, Demosisto, will announce a candidate as early as next week to run in a by-election next year for the city’s semi-democratic legislature to fill a seat vacated when Law was disqualified because of a government legal challenge.

In the long run, he said there’s plenty of work to do getting Hong Kongers to “adjust their mindset” to resist Beijing’s tightening grip.

“I still believe Hong Kong people can overcome even though we are inside the prison set by China.”Kelvin Chan & Yi-Ling Liu, Hong Kong, AP