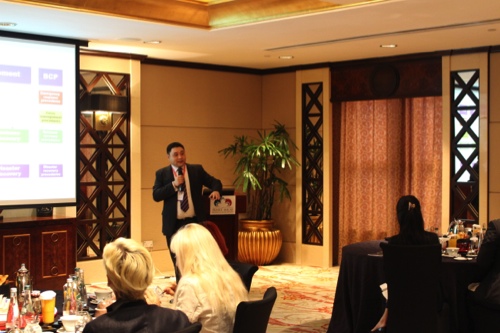 Risk management has become an increasingly important matter for businesses. However, Kegan Chan, assistant vice president of Marsh Risk Consulting, suggested that “a lot of new risks arise” – but businesses fail to pay enough attention to them.
Mr Chan was speaking at yesterday’s France Macau Business Association (FMBA) breakfast meeting. He provided attendees with an introduction to business emergency response strategies and crisis management.
During the seminar, the vice president made reference to the gas explosion in Taiwan several weeks ago, and suggested that people sometimes fail to notice the risks present in their surroundings.
“Have you thought about who owned the gas pipe underneath the building? Apparently, in the Taiwan case, the gas pipe blew up somewhere down the street. It wasn’t actually the supplier who owns these pipes. And now they are arguing over the liability of who owns the pipes and [who] should be responsible for compensating all the lives lost and all the buildings lost in between,” he pointed out.
Kegan Chan went on to advise companies who own assets in Macau to identify the ownership of the pipelines underneath their assets.
If it turns out that ownership of the pipes belongs to the proprietors of the buildings on top of them, it is possible that businesses will be responsible for the loss of life or assets in the case of an accident.
The vice president later spoke to the Times on the sidelines of the FMBA event and gave further examples of “new risks” – some of which, he explained, have newly arisen because of neglect.
“For example, the flooding risk has been there traditionally, but people don’t really make note of it as a particular risk. They just view it as a natural disaster,” he said
“[However], people nowadays are trying to be more resilient to more catastrophic risks like flooding, earthquakes, even an underground pipe explosion. All of these are ‘new risks,’ which people did not believe were their responsibility in the past… [These circumstances] are what I call the new risks. They have been there in the past, but people were just not aware of it,” he said.
The risk consultant also talked about the threat of the Ebola virus to Asia. He believes that, although the virus is a greater threat in areas with a very high population density, “I think this particular part of Asia (the mainland, Hong Kong and Macau) would be more resilient.”
“We have dealt with SARS before, and people and even the entire culture would have a greater awareness [compared to] people who have never came into contact with widespread pandemics,” Kegan Chan said.
The vice president added that he hopes to instill in people an awareness of risks. “I think the most important [thing] we should get across to people is [the importance of] awareness.”
He believes that people should not treat disasters as random events without contemplating how they might avoid or mitigate damage.
“The ultimate idea is to increase people’s awareness of these particular risks,” he concluded.
The FMBA will hold its board meeting, general assembly and networking cocktail event tomorrow at the Grand Lapa. It will also organize a fireworks networking dinner event in September at the  Macau Tower.