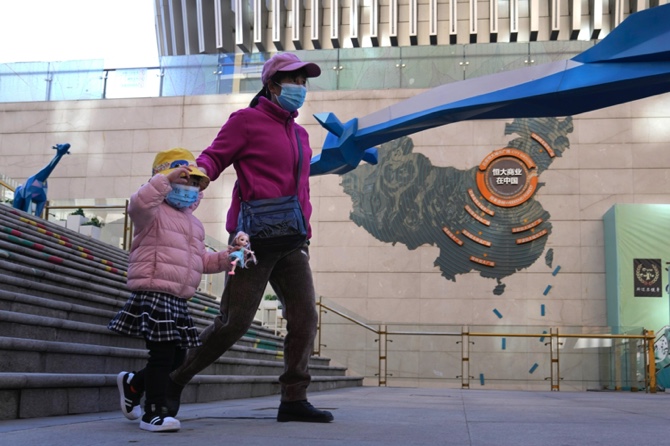 Global investors are watching nervously as one of China’s biggest real estate developers tries to avoid a default on its $310 billion mountain of debt.

Evergrande Group, which is scrambling to turn assets into cash, rattled financial markets Friday when it warned it might run out of money. It said missing a payment on bonds or other debts might trigger an avalanche of demands to pay other debts immediately.

The ruling Communist Party can keep credit markets functioning but won’t bail out Evergrande, which the central bank accused of borrowing recklessly, economists say. They say that would be the wrong signal at a time when Beijing is trying to force companies to reduce dangerously high debt loads.

On Friday, Evergrande said it had received a demand to make good on a $260 million obligation and couldn’t guarantee it would be able to keep up with its debts.

The central bank and bank regulator rushed to reassure the public that China’s economy can be shielded from Evergrande’s problems. They promised to keep lending markets functioning.

Evergrande Group, founded in 1996, is one of China’s biggest builders of apartments, office towers and shopping malls.

The company says it has more than 200,000 employees and supports 3.8 million jobs in construction and other industries. Evergrande says it has 1,300 projects in 280 cities and assets worth 2.3 trillion yuan ($350 billion).

Evergrande’s founder, Xu Jiayin, was China’s richest entrepreneur in 2017 with a net worth of $43 billion, according to the Hurun Report, which follows China’s wealthy. He tumbled down the list as internet industries boomed but still ranked as China’s richest real estate developer last year. He also topped Hurun’s 2020 list of philanthropists, giving away an estimated 2.8 billion yuan ($420 million).

WHATíS THE IMPACT SO FAR?

Evergrande’s Hong Kong-traded shares have fallen 90% this year. Its bonds trade at a 75% discount to face value.

Evergrande reported a $1.4 billion first-half profit but says sales weakened because news of its cash crunch made buyers nervous.

Evergrande has been squeezed by limits imposed last year on real estate-related borrowing.

Economists have been warning China’s rising debt is a threat for more than a decade. Reducing financial risk has been a ruling party priority since 2018. But total corporate, government and household borrowing rose to the equivalent of nearly 300% of annual economic output last year — unusually high for a middle-income country.

News reports indicate Evergrande borrowed everywhere it could, including by requiring employees of its construction contractors to buy its debt. The central bank, in unusually stinging comments, said Friday its problems were due to “poor management and blind expansion.”

In 2017, state-owned China Citic Bank in Shenzhen agreed to lend 40 billion yuan ($6.2 billion) for an Evergrande project only after its executives agreed to invest at least 3 million yuan ($465,000) each, according to the business news magazine Caixin.

HOW DOES THIS FIT INTO PARTYíS PLANS?

China’s economic boom was propelled by a frenzy of construction that blanked cities in new apartments, shopping malls and other buildings. Now, the ruling party wants to change course and nurture self-sustaining economic growth based on domestic consumption instead of trade and investment.

WHAT ABOUT OTHER DEVELOPERS?

Other major developers such as Vanke Co., state-owned Poly Group and Wanda Group have yet to report similar problems. But hundreds of smaller developers have shut down since regulators tightened control in 2017 over fundraising tactics such as selling apartments before construction begins.

Residential real estate is seen as low risk to the financial system, because most apartments are bought for cash, not with mortgages. That makes a wave of foreclosures and strain on banks like in the United States after the 2008 crisis unlikely.

A midsize developer, Fantasia Holdings Group, announced on Oct. 5 it failed to make a $205.7 million payment due to bondholders. Another, Kaisa Group Holdings Ltd., has warned it might fail to pay off a $400 million bond due this week.

IS THERE RISK OUTSIDE CHINA?

Evergrande owes $18 billion to owners of foreign-currency bonds, but much of that is held by Chinese banks and other institutions. Unlike Lehman, whose assets were financial instruments with prices that can swing wildly, Evergrande owns 1.4 trillion yuan ($215 billion) of land and partially completed projects with relatively stable prices.

Regulators appear to be focused on making sure homebuyers get apartments they paid for and preventing any financial surprises.

Evergrande has formed a “risk management” panel with experts from other companies. The government of its home province of Guangdong is sending a team to Evergrande headquarters to supervise operations. Cities and provinces with Evergrande projects have set up teams to scrutinize their finances.

The government also is promising measures to support economic growth that sank to an unexpectedly low 4.9% over a year earlier in the quarter ending in September due to the slowdown in construction and real estate sales.

On Monday, the central bank increased the amount of money banks have available for lending by 1.2 trillion yuan ($190 billion). JOE McDONALD, BEIJING