EXPLAINER | Tokyo Olympics march on without fans from abroad 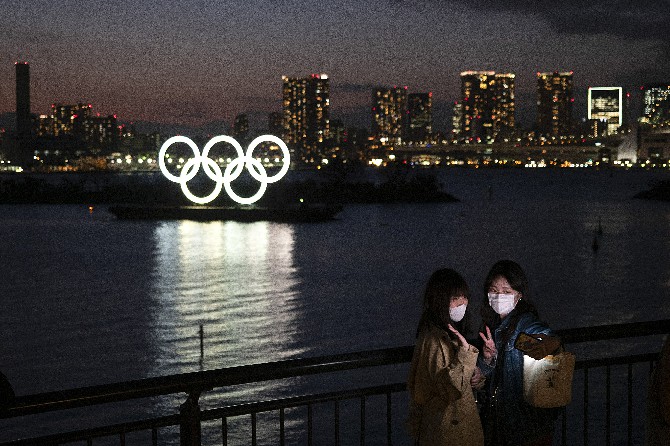 Tokyo Olympics and the International Olympic Committee have banned fans from abroad with the games opening in four months. It’s part of the fallout from holding the Olympics in the middle of a pandemic.
IOC President Thomas Bach said Saturday he was “sorry” when the decision was announced. In truth, what matters to the IOC — like any sports business that relies for most of its income on selling broadcast rights — is getting the Olympics on television. Broadcast rights in the latest four-year Olympic cycle accounted for 73% of the IOC’s income. That broadcast income amounts to about USD4 billion with American network NBC paying about half.
The IOC must get the 11,000 athletes into the venues and in front of cameras. Japanese residents will fill the stands to whatever level is allowed. The decision on venue capacity will come next month.
But barring fans from abroad has created collateral damage and lots of questions.

LOOKING FOR REFUNDS
Ticket sales for fans from abroad is handled by so-called “Authorized Ticket Resellers” scattered across the globe. They are typically appointed by national Olympic committees and work as middlemen. They are allowed to tack on service fees of up to 20% on tickets. They also sell pricey package deals including hotels.
It’s likely the actual ticket price will be refunded, although the timeline is anyone’s guess. The fees may be more difficult to recover.
Tokyo organizing committee CEO Toshiro Muto has already said his body is not responsible for refunds on hotels or airline flights.
Muto said 600,000 Olympic tickets had been sold to fans aboard. This pales in comparison to the 4.45 million sold to Japan residents. Organizer said 7.8 million tickets would be available when ticket sales started several years ago.
Muto seemed to rule out fans entering who may have received tickets from sponsors.
“If they are part of the operation of the games, if they are somewhat involved in the operation then there is still a possibility they may be able to enter into Japan,” Muto said. “But solely as spectators for watching games — no, they will not be allowed to make an entry.”

THE BUDGET TAKES A HIT
Ticket sales were to generate $800 million in income for the privately funded operating budget — the third largest income source after local sponsors and contributions from the IOC.
Any shortfall will have to be made up by Japanese government entities.
This puts even more burden on Japanese taxpayers. The overall cost of the games is officially $15.4 billion, the largest on record according to a University of Oxford study. Several Japanese government audits suggest the cost might be twice that much. All but $6.7 billion in public money.

COVID-19 AND VACCINES
Japan has attributed fewer than 9,000 deaths to COVID-19 and has handled the pandemic better than most countries its size. A state of emergency was lifted on Sunday for Tokyo and three adjacent prefectures. Cases are expected to start increasing again, but the hope is to avoid a large spike and public concern. New cases in Tokyo have been around 400 in the last several days.
The vaccine rollout in Japan has been slow. Relatively few local spectators are expected to be vaccinated when the Olympics open on July 23. The 11,000 Olympic and 4,440 Paralympic athletes will not be required to have a vaccine to enter Japan. But the IOC is encouraging as many vaccinations as possible. It also does not want to be seen to push young athletes to the front of the line ahead of the elderly and other vulnerable populations.
Athletes will have to pass a COVID-19 test before leaving home. They are to be tested again upon arrival, and then frequently in the Athletes Village, the venues, and training sites. All of these will operate like a bubble. Athletes are also being told to leave Japan as soon as their competition ends.

PRESSURE AT HOME
Several polls have shown 80% in Japan want the Olympics canceled or postponed again. The IOC and local organizers must turn around public opinion. Two scandals in the last few weeks have not helped. Yoshiro Mori, the president of the organizing committee, was forced to resign after making demeaning comments about women.
Last week creative director Hiroshi Sasaki resigned after saying a female, “plus-size” celebrity should appear in the opening ceremony dressed up like a pig — the “Olympig.”
Almost forgotten is the vote-buying scandal two years ago that forced out Japanese Olympic Committee president and Tsunekazu Takeda. Takeda denied any wrongdoing and also resigned from the IOC. Takeda signed off on payments that French investigators say were used to buy the votes of IOC members when Tokyo was picked by the IOC in 2013 ahead of Istanbul and Madrid.

THE TORCH RELAY BEGINS A BIG TEST
The torch relay opens on Thursday from northeastern Fukushima prefecture. It’s a giant test that starts four months ahead of the opening ceremony. The relay is set for 121 days with 10,000 runners crisscrossing Japan.
The torch kickoff will be closed to the public. Fans along the route are being asked to wear masks, social distance, and to cheer quietly, if at all. Organizers reserve the right to stop the relay, reroute it, or do whatever it takes to keep it from becoming a mass spreading event. The relay started a year ago but was stopped almost immediately when the Olympics were postponed. Stephen Wade, Tokyo, AP