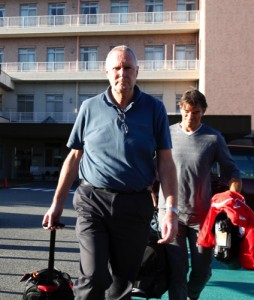 Formula One driver Jules Bianchi remains in critical but stable condition, the Frenchman’s family said yesterday as FIA launched an investigation into his accident at the Japanese Grand Prix.
The 25-year-old Bianchi had emergency surgery for a severe head injury on Sunday after his car hit a crane that was sent to recover another vehicle.
In a statement distributed in conjunction with the Mie Medical Center, Bianchi’s family said the driver “has suffered a diffuse axonal injury and is in a critical but stable condition.”
Bianchi crashed on the 44th lap in Sunday’s rain-shortened race at the Suzuka circuit. His car went off at Turn 7, where Sauber driver Adrian Sutil had crashed two laps earlier.
According to a report issued by FIA, Bianchi lost control of his car, travelled across the run-off area and hit the back of the tractor that was being used to remove Sutil’s car. Bianchi was unconscious when he was taken from Suzuka to the hospital.
FIA, the governing body of the sport, is investigating the incident. It confirmed in a statement to The Associated Press that its president, Jean Todt, has asked race director Charlie Whiting to carry out a report on the crash.
“This report is still under elaboration as it concerns the cross-checking of a number of different sources of information,” FIA said. “It will aim to be as complete and detailed as possible in order to understand exactly the accident which occurred.”
Bianchi, who started his career in Formula One in 2013, is also a member of the Ferrari young driver’s academy. The Italian team has asked Professor Alessandro Frati, a neurosurgeon from the Sapienza University of Rome, to travel to Japan to work alongside the local medical staff taking care of Bianchi.
Also at Bianchi’s bedside is Gerard Saillant, the president of FIA’s medical commission who oversaw Michael Schumacher’s treatment when the German was in a coma following his ski accident. AP