Fate of new Zone D to be decided by the public 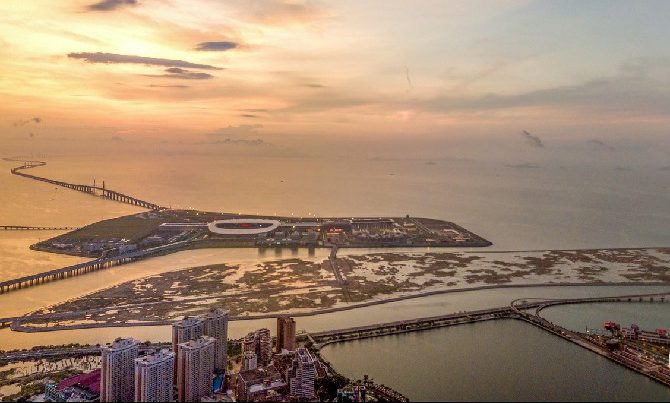 Zone A, as seen last year, next to the land plot for the Macau Port of the Hong Kong-Zhuhai-Macau Bridge

The future of Zone D, one of the new land reclamation areas, has not yet been decided, Chief Executive Ho Iat Seng said yesterday on the sidelines of the groundbreaking ceremony for the Macao Polytechnic Institute’s new building.
According to the Chief Executive, no decision has been made yet as the government is waiting for the results from the Macau Master Plan’s public consultation launched on September 4.
Questioned regarding the government’s intention to relocate Zone D of the new landfills, the Chief Executive said, “in the [Master] Plan we have not yet eliminated that part. We have commissioned a company to draft this plan and we did not make any change or adjustments to it yet. We need to understand if the Zone D location [adjacent to] Zone C is convenient and feasible.”
“The government has not yet taken any decision on whether or not we will eliminate the Zone D,” added Ho. “For Zone C, we can already see it [being built].”
“This is the first general plan of Macau. […] This is just a public consultation version and not yet a final version. During this public consultation process, we want to hear more from the population so then we can proceed with the necessary changes [to the plan],” Ho said.
The Chief Executive added that the idea recently aired by the government of relocating Zone D to an area in the vicinity of Zone A, was intended to provide a better quality of life for the future residents of that area.
“We have forecasted that 32,000 family clusters will live in Zone A in the near future. In Zone A, there are no gardens or parks in the plan or any green-area for the about 96,000 people that are expected to live there, only streets. Is that convenient in the long term for the sustainable development of Macau? We need to evaluate the complementary equipment for leisure and wellbeing. This is why we are now thinking about […] if it is convenient or not to continue with the former plan [for Zone D],” the Chief Executive said.
“We don’t want [the new landfill area that would replace Zone D] to be used to build more housing but, instead, to allow the people in Zone A to enjoy green areas,” he added.
Nevertheless, the Chief Executive reassured that no housing units will be lost if it is decided not to build the Zone D landfill by the Taipa waterfront and instead relocate it to the northeast part of the Peninsula linked to Zone A.
“We did the calculations and for the coming 20 years, we will have enough land supply for housing. If you ask me after 20 years, then I cannot assure it. But for the coming 20 years, the land reserves are sufficient.
Ho also stressed yesterday that Macau does not possess the autonomy to decide on land reclamation matters. The final decision is in the hands of the central government.
“The landfills need to have superior authorization from the central government,” said Ho. “It is not a matter of personal decision of whether today I want it and I do it and tomorrow I stop wanting it and I give up on it. That’s not how it works.”
“If we start the landfill of Zone D, we cannot withdraw it and put the land back in its original form. The population needs to consider if the original Zone D at the side of Zone C is convenient to continue there or not.”
The Chief Executive mentioned that when the original plan for the new landfills labeled A through E was completed and submitted for the approval of the Central government, “there was no solution available. But now we have alternatives that we can propose to the central government and [with which] request changes.”