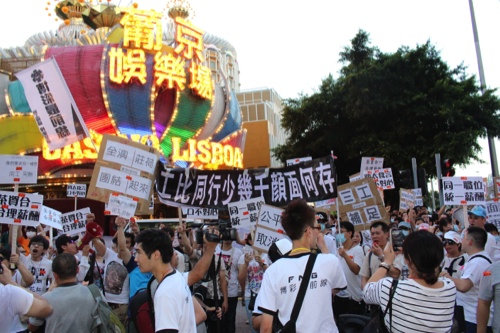 The local casino employees’ group, the Forefront of Macau Gaming (FMG), has decided to launch industrial action against local casino operator SJM after rallying, for the first time, against all six gaming concessionaires yesterday afternoon.
During the event, some demonstrators broke through the police line. They also gathered outside Grand Lisboa, demanding to see the SJM chief executive officer, Ambrose So. The protestors first started gathering near the Macau Cultural Centre at around 4 p.m.
FMG claimed that there were 7,000 people participating in the protest, while the figure from the PSP was 1,400.
Joey Au Yeung, a casino dealer for seven years at MGM China Holdings Ltd. and one of the demonstrators, said almost half of her monthly salary of 17,000 patacas (USD2,130) goes to pay rent and it’s difficult to make ends meet.
“I have to rent and live in a 300 square-foot flat with my three kids and my husband, with little hope of owning a house,” said Au Yeung, who works six days a week, including two night shifts. “I have no time to spend with my kids.”
The protest comes as casino operators face worsening labor strains as some of them near completion on new resorts, requiring thousands more workers starting from next year. The tensions also coincide with a Beijing government bent on rooting out corruption and money laundering, via a crackdown that’s already hit gambling revenues.
FMG president Ieong Man Teng said that they believe the casino operators should bear their social responsibilities and adjust the amounts of benefits and compensations granted to their staffs. They also asked for the casinos to abolish the internship positions.
Moreover, the president has said that the Chief Executive Chui Sai On has not provided enough protection to the local casino workers against non-resident workers.
“We hope that there will be clearly stated regulations that say that positions in casinos, such as croupiers, pit supervisors and pit managers, can only be held by locals. Then our frontline employees are protected,” Mr Ieong said.
Meanwhile, another FMG senior member, Wong Cheung Yuen, said that his group is also receiving demands from staff members of other departments, such as security guards. He said that it is possible that FMG will organize an activity only for those staff members occupying non-gaming positions.
The group began its march towards the Government Headquarters at about 5.15 p.m. Protestors chanted slogans and requested for the six gaming license holders to share their profit with their employees through making salary adjustments.
When they arrived at Avenida 24 de Junho, between Galaxy’s StarWorld Hotel and Wynn, some protestors insisted on walking towards MGM, which is the route that they initially decided on.
Nevertheless, the Public Security Police (PSP) adjusted the protestors’ route and only allowed them to walk to Rua Cidade de Sintra.
Some protestors then sat down on the road and chanted “let go” before breaking through the police line and walking a short distance into Avenida 24 de Junho.
After negotiating with the police, the organizers decided not to move forward and returned to Rua Cidade de Sintra, having been warned by the PSP that organizers would be prosecuted if they did not follow police instruction.
The crowd then continued its march and passed by Grand Lisboa. Protestors again chanted slogans such as “shame on you, Ambrose So,” and asked the SJM CEO to talk to them.
Demonstrators eventually arrived at the open area opposite the Government Headquarters, with several FMG members handing a letter to a government representative.
They have also decided that SJM croupiers will launch industrial action against their employer if the operator does not respond to them. FMG explained that the action would involve croupiers refusing to work and simply sitting there for a certain period of time during their shift.  JPL/Agencies