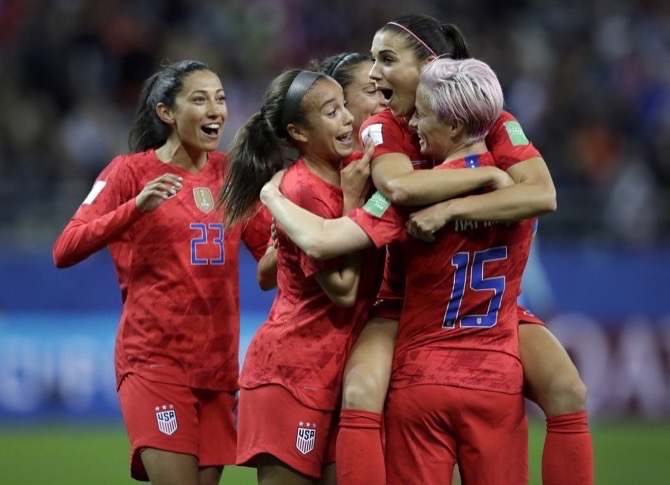 Thailand was never a real threat to the U.S. national team. Even so, the three-time Women’s World Cup champions had no desire to go easy on a lesser opponent in their opening game.

Goals matter in the group stage. And statements matter in soccer’s biggest tournament.

“Obviously we have the utmost respect for everyone we play, but it’s the World Cup,” said captain Megan Rapinoe.

Alex Morgan tied the tournament record with five goals and the United States opened with a historic 13-0 rout of Thailand on Tuesday night.  Samantha Mewis and Rose Lavelle each added a pair of goals for the United States, which broke the record for goals and margin of victory in a World Cup game.

Lloyd, 36, became the oldest American woman to score at a World Cup and joined Germany’s Birgit Prinz as the only players to score in five straight World Cup games.

The United States faced criticism over its relentless attack. The Americans led 3-0 at the break and then broke the match open in the second half, with the players celebrating goal after goal.

The Americans meant no disrespect, said Morgan, but they simply wanted to position themselves for a run at a second consecutive title.

“We really just came into the game really wanting to showcase ourselves,” Morgan said. “Every goal matters in this tournament and that’s what we were working on.”

Asked about the lopsided score, U.S. coach Jill Ellis wondered if a 10-0 victory in a men’s World Cup would elicit the same questions.

“This is a world championship, so every team here has been fantastic to get to this point. And I think that to be respectful to opponents is to play hard against opponents, and as Alex said, it’s a tournament where goal differential is important,” Ellis said.

The two teams were the last to kick off in the group stage for the monthlong tournament. Host France opened the World Cup before a sellout crowd in Paris on Friday night with a 4-0 victory over South Korea.

Ranked No. 1 in the world, the Americans had dropped only one match in their previous 38, a loss to France in Le Havre in January. The team was 7-1-2 overall this year, with six straight wins going into the World Cup.

The last time the Americans played in the sport’s top tournament, Lloyd had a hat trick in the first 16 minutes and the United States beat Japan 5-2 in Canada for the trophy.

The U.S. pounced early against Thailand, too, on Morgan’s header in the 13th minute off Kelley O’Hara’s precisely placed cross. Mewis, Lavelle and Horan were all making their World Cup debuts.

“When you get a deluge of goals like that, it’s a good feeling,” Ellis said. “It builds confidence.”

Thailand, ranked No. 34 in the world, was clearly outmatched even though the team has shown progress on the world stage. Making its World Cup debut in 2015 four years ago, Thailand finished third in its group but earned its first win, a 3-2 victory over Ivory Coast.

At the final whistle, Lloyd and Christen Press were seen consoling the Thailand goalkeeper. Morgan put her arm around Thailand’s Miranda Nild, who was wiping away tears on the field. Nild and Morgan both played college soccer for the California Golden Bears.

“They were disappointed of course, they intended to make an impression in this first match and they were disappointed,” coach Nuengrutai Srathongvian said through a translator. “Yes, they are all athletes and they will be resilient. We’ve got two more games to play and we need to bounce back.”

The World Cup comes at a time when female players across the globe are seeking better treatment, conditions and pay. The U.S. national team has long championed equal rights, and players collectively filed a lawsuit earlier this year that alleges discrimination by the U.S. Soccer Federation and are seeking pay equitable with that of the men’s national team. The players say the lawsuit is on hold while they’re in France.

Up next for the U.S. is World Cup newcomer Chile on Sunday in Paris. In the final group match before the knockout round, the Americans will travel to Le Havre to face nemesis Sweden, who they’ve been grouped with six times in World Cup play. MDT/AP