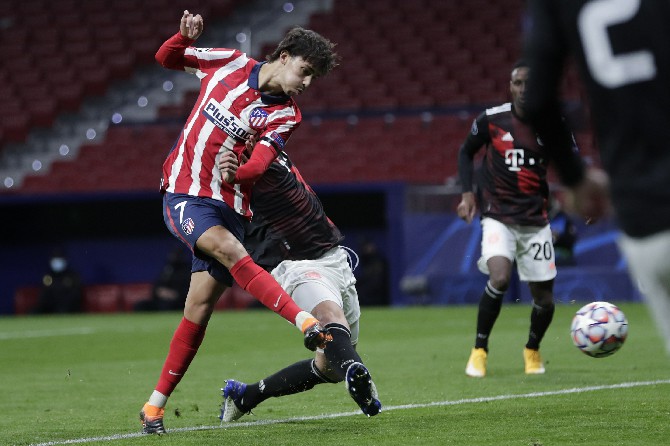 Atlético Madrid failed to take advantage of Bayern Munich’s weakened squad yesterday [Macau time], conceding a late penalty in a 1-1 draw and squandering a chance to reach the knockout stage of the Champions League in advance.
Atlético was held against the depleted defending champions, which equalized with Thomas Müller’s penalty kick in the 86th minute after João Félix had put Atlético ahead in the first half.
“We are upset because we let a very important victory slip away,” Atlético’s Marcos Llorente said. “We fought hard and played well the entire match but allowed them to equalize with a penalty in the end. We leave with a bad taste in our mouths.”
A win would have been enough to give Atlético a spot in the round of 16 after Lokomotiv Moscow lost 3-1 to Salzburg at home, but the draw kept the Spanish club only two points in front of third-place Salzburg. Diego Simeone’s team will need at least a draw when it visits Salzburg in the final round next week.
“We played a great match again,” Simeone said. “We could have opened a bigger lead in the first half, but in the end the penalty cost us the victory. It hurts, but we are still alive going into the final match against Salzburg.”
Bayern had already clinched first place after four consecutive victories in the group and rested several regular starters for the match in the Spanish capital. The defending champion reached 13 points, while Lokomotiv stayed with three.
Atlético looked in control for most of the match, creating most of the dangerous chances. Bayern threatened only a few times on counterattacks and its first attempt on target only came in the second half.
Félix put the hosts ahead from close range after a nice run through the right flank by Llorente, who managed to make a pass toward the center of the area just before the ball crossed the end line. It was the ninth goal in the last 11 games with club and country for the Portugal international, who almost added his second with a strike that hit the crossbar in the 58th.
“We played well but we are frustrated for not being able to get this win, which would have put us in the last 16,” Félix said. “We had more opportunities to score than they had but we couldn’t capitalize on them like they did in the end.”
Müller evened the match from the penalty spot after he was brought down inside the area by Felipe, who entered in the second half to replace the injured José María Giménez.
It was the third straight draw for Atlético in the Champions League after a win against Salzburg and an opening 4-0 loss to Bayern in Germany.
Bayern rested several regular starters, including striker Robert Lewandowski, goalkeeper Manuel Neuer and midfielder Leon Goretzka. Coach Hansi Flick used two 17-year-old players in the starting lineup — Bright Arrey-Mbi and Jamal Musiala.
Atlético was without Diego Costa because of an injury, and Simeone still couldn’t count on Luis Suárez after he recently tested positive for the coronavirus.
The draw ended Bayern’s run of 15 consecutive victories in the Champions League, but the German powerhouse extended its unbeaten streak in away games in European competitions to 16 matches.
Atlético extended its unbeaten run at home to 21 matches in all competitions, with its last loss at the Wanda Metropolitano Stadium coming against Barcelona in the Spanish league exactly a year ago. TALES AZZONI, MADRID, AP