The Spanish league title race will go down to the final round, with rivals Barcelona and Real Madrid still in contention.
Barcelona routed city rival Espanyol 5-0 yesterday [Macau time] to increase its lead going into next weekend, when another victory will secure the Catalan club its second consecutive title.
Luis Suarez scored twice, with Lionel Messi, Neymar and Rafinha adding one goal each at the Camp Nou to keep Barcelona one point in front of Real Madrid, which defeated Valencia 3-2 with two goals from Cristiano Ronaldo and one by Karim Benzema.
Atletico Madrid, which was trailing Barcelona for most of the season and was tied in points before this weekend, dropped out of contention after a surprising 2-1 late loss to already relegated Levante. Atletico had been bidding for its second league title in three seasons.
In the final round, Barcelona will play at Granada, which was fighting against relegation but on Sunday mathematically secured its place in the top flight with a 4-1 win at Sevilla.
Real Madrid will play at Deportivo La Coruna, which is in the middle of the table and also won’t have anything to play for in the last round.
“We had good rhythm from the start, creating pressure following turnovers,” Barcelona coach Luis Enrique said. “We played a complete game, I’m happy with what we’ve achieved. Now we just have to put it away by beating Granada.”
Barcelona enters the final weekend with 88 points from 37 matches. It has the advantage on the head-to-head tiebreaker against Real Madrid, so the rival will need to win its game in La Coruna and hope Barcelona at least draws in Granada. 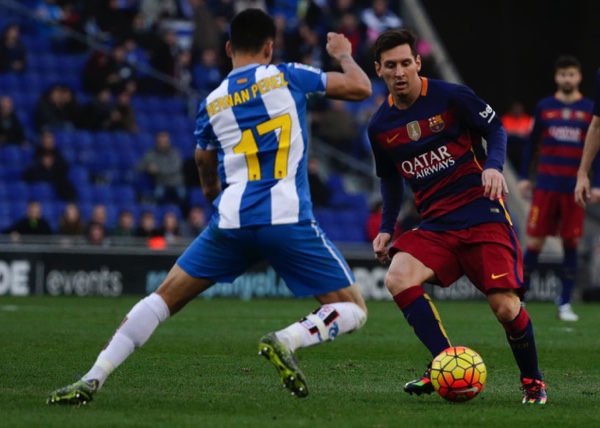 “I’m always positive,” Real Madrid coach Zinedine Zidane said. “We have one game left to play, anything can happen. We have to give everything and […] we will see what happens right up until the end, until the very last minute.”
Barcelona will be trying to win its sixth league title in eight seasons, while Madrid will be looking to lift the trophy for the first time since 2012, and second time in eight seasons.
Real Madrid and Atletico Madrid were coming off difficult games in the semifinals of the Champions League, when both advanced to the May 28 final in Milan. Barcelona will play in the Copa del Rey final against Sevilla on May 22.
The Catalan club recently relinquished a nine-point lead after going winless in four straight games, but Luis Enrique’s team picked up the pace just in time, winning four consecutive games by outscoring opponents 21-0 to stay ahead going into the decisive round.
Barcelona dominated from the start at the Camp Nou and Messi opened the scoring from a free kick in the eighth minute, curling a left-foot shot over the wall.
Messi then set up Suarez’s first goal with a pass into the area in the 52nd, and the striker increased the lead with a header in the 61st. Substitute Rafinha got on the board after a blunder by goalkeeper Pau Lopez in the 74th and Neymar completed the scoring from close range in the 83rd.
Suarez reached 37 league goals, four more than Ronaldo, who put Real Madrid ahead in the 26th at the Santiago Bernabeu Stadium and added his second in the 59th after Benzema had netted in the 42nd.
Valencia’s goals came from striker Rodrigo in the 55th and midfielder Andre Gomes in the 81st. It played a man down from the 84th because of a red card for Rodrigo.
Madrid got the win, its 11th straight in the league, despite missing some key players because of injuries, including Gareth Bale, Luka Modric and starting goalkeeper Keylor Navas. It was the final career home game for Alvaro Arbeloa, the 33-year-old defender who announced earlier in the week that he was retiring.
Atletico Madrid had its six-­game winning streak in the league halted by a disappointing 2-1 loss at Levante, which had been relegated in the last round.
Fernando Torres put Diego Simeone’s team ahead just two minutes into the game in Valencia, but Victor Casadesus equalized in the 30th and substitute Italian striker Giuseppe Rossi netted the surprise winner in the 90th to end Atletico’s hopes of another title.
“Levante played a great match and was better than us,” Simeone said. “I can just congratulate them. We had some chances to score, but they defended well.”
Atletico is three points behind Barcelona but can’t overcome the Catalan club because it loses on the head-to-head tiebreaker.
In the fight against relegation, Getafe and Sporting Gijon drew 1-1 to both move one point ahead of second-to-last Rayo Vallecano, which lost 2-1 at Real Sociedad. Getafe and Sporting Gijon have 36 points each, but Getafe is outside the relegation zone on the tiebreaker against Sporting. The bottom three clubs are relegated. Tales Azzoni, Madrid, AP