Bundesliga top-scorer Robert Lewandowski scored twice for Bayern Munich to clinch an unprecedented fourth successive title with a 2-1 win at Ingolstadt on Saturday.
The Poland striker opened the scoring with a penalty in the 15th minute, after Franck Ribery was brought down by Marvin Matip, and he claimed his 29th goal of the season not long after with a precise strike inside the far post after a brilliant through ball from Xabi Alonso.
Moritz Hartmann pulled one back with another penalty — conceded by Alonso — before the break but Bayern never looked in danger of missing out on its record 25th Bundesliga title, and its 26th German championship overall.
“The team played a brilliant season. We had the best challengers in Bundesliga history,” Bayern forward Thomas Mueller said after winning his own fourth consecutive title. “It’s extraordinary, we don’t need to play it down.”
Germany coach Joachim Loew added his congratulations.
“The fourth title win in a row is testament to the great quality, the sheer will, and the unbelievable consistency of Bayern over the last years,” Loew said.
Pep Guardiola, who is leaving for Manchester City after the German Cup final against Dortmund, became the first Bundesliga coach to win three titles in his first three seasons.
“I’d like to share this title with Jupp Heynckes. We’ve achieved something remarkable,” Guardiola said in tribute to his predecessor. 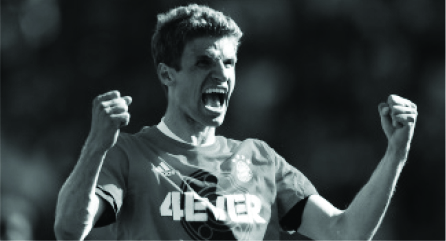 Borussia Dortmund’s 1-0 loss at relegation-threatened Eintracht Frankfurt meant even a defeat would have been enough for Bayern, which was eight points clear of Dortmund with one round remaining. Dortmund’s 77 points were already a record for a second-place team since the Bundesliga began in 1963.
Stefan Aigner’s early header proved enough for Frankfurt to climb out of the relegation zone, one point above Werder Bremen in the relegation playoff spot after its scoreless draw at Cologne.
Frankfurt was fortunate Mats Hummels’ equalizer before the break was ruled out for offside. Video replays showed the Dortmund captain was onside at the time.
“The way the team has played in the last weeks shows that survival is possible,” Frankfurt coach Niko Kovac said after the side’s third successive win.
Stuttgart gave away a 1-0 lead and lost 3-1 at home to Mainz to move a step closer to relegation. Stuttgart was three points below Frankfurt, with Wolfsburg next away.
“I’m speechless. I’m sorry for the fans,” said Stuttgart defender Kevin Grosskreutz, who was close to tears.
Stuttgart fans stormed the pitch after the game. The side needs a favor from Bremen, which hosts Frankfurt for a relegation showdown on the last day of the season.
“It’s not yet over,” Stuttgart coach Juergen Kramny said. “Sometimes in football you need a miracle though.”
Darmstadt secured survival in its first season back in the Bundesliga with a 2-1 come-from-
behind win at Hertha Berlin that ended the home side’s Champions League hopes. Sandro Wagner scored the winner late against his former club, five minutes before he was sent off.
Andre Hahn scored twice as Borussia Moenchengladbach came from behind to beat Bayer Leverkusen 2-1 and all but secure the Champions League playoff spot. Charles Aranguiz’s first goal for Leverkusen looked to extend the visitors’ seven-game winning streak, but Hahn equalized before the break and sealed it late.
Schalke was one minute away from a 1-0 win over Augsburg to stay a point behind ‘Gladbach after Klaas Jan Huntelaar’s 82nd-minute strike. Then Daniel Baier scored in the 89th for a draw to leave Schalke three points adrift of ‘Gladbach, and behind Mainz and Hertha on goal difference. Augsburg was safe for another year.
“It’s very, very bitter,” said Schalke coach Andre Breitenreiter, tipped to make way for Augsburg counterpart Markus Weinzierl next season.
Also, Wolfsburg won at Hamburger SV 1-0, and already-relegated Hannover defeated Hoffenheim 1-0 at home. Both Hamburg and Hoffenheim secured survival despite defeats. Ciaran Fahey, Berlin, AP