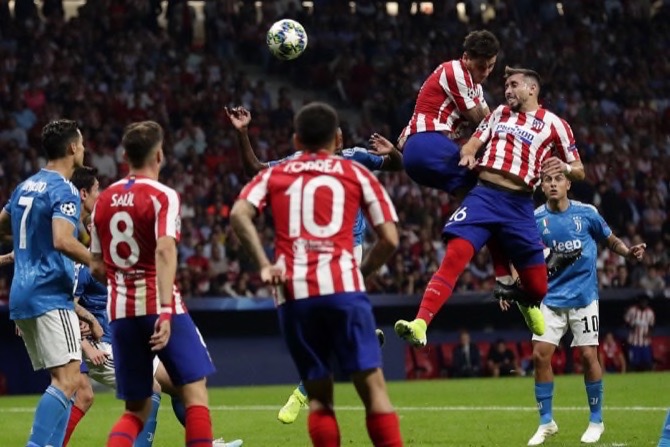 Finding itself in trouble again against Juventus in the Champions League, Atlético Madrid just kept pushing.

Trailing by two goals against the team that knocked it out of the competition six months ago, the Spanish side found a way back this time.

Héctor Herrera scored in the 90th minute of his Atlético debut to salvage a 2-2 draw against the Italian champions yesterday [Macau time] in their group opener.

“What I liked the most was that we never gave up,” Atlético coach Diego Simeone said. “We kept pressing and kept trying to create chances. The draw was well-deserved.”

Stefan Savic had put Atlético back in the game in the 70th after Cristiano Ronaldo’s Juventus opened a 2-0 lead through Juan Cuadrado and Blaise Matuidi.

“The characteristic of this team is to keep fighting until the end,” said Herrera, the Mexican midfielder who joined from Porto in the offseason. “We wanted the win, but this draw is a good result against a team like Juventus.”

Ronaldo, who was jeered by the rowdy Atlético crowd nearly every time he touched the ball, led Juventus past Atlético with a hat trick in the round of 16 last season after the Spanish club had won the first leg 2-0 in Madrid.

“I think we played well but we have a bitter taste in our mouth because we felt we had the game in our hands,” Juventus coach Maurizio Sarri said. “We need more attention and focus on set pieces. We will work on that.”

Herrera jumped high from near the penalty spot to head in the equalizing goal from a corner kick by Kieran Trippier. Teammate José María Giménez nearly got in the way, but Herrera was still able to send the ball into the corner.

“We played a great game but we must be more careful to defend against set pieces,” Juventus defender Leonardo Bonucci said. “It’s a pity because it cost us two points. At this level we need to stay focused for 90 minutes.”

Ronaldo was kept in check during most of the match, with his best chance coming deep into stoppage time. He niftily got past a defender inside the area but his low show was wide of the far post.

Ronaldo’s Portugal teammate João Félix had a good Champions League debut with Atlético, but the 19-year-old forward — known back home as Ronaldo’s successor — couldn’t capitalize on his chances.

Cuadrado opened the scoring after a pass from Gonzalo Higuaín early in the second half, making a neat cutback inside the area and firing a firm shot into the top corner. Matuidi added to the lead after another counterattack, finding the net with a header from a well-placed cross by Alex Sandro.

Savic pulled Atlético closer with a header from close range after being set up by Gimenéz. The hosts, which lost only three of its last 23 matches in European competitions, kept pressing until being rewarded with the late Herrera goal.

In the other group match, Lokomotiv Moscow won 2-1 at Bayer Leverkusen. AP