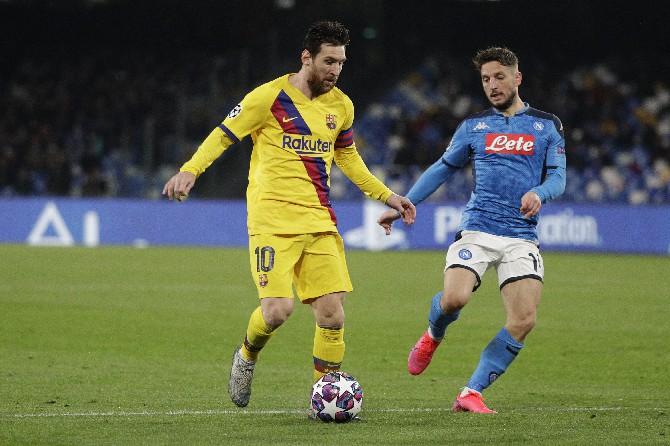 On a night when Lionel Messi was expected to put on a show in the stadium that was once Diego Maradona’s, the Barcelona forward did relatively little in a 1-1 draw at Napoli in the first leg of the Champions League round of 16 yesterday [Macau time].
Dries Mertens tied Napoli’s all-time scoring record by curling in a first-half shot and Antoine Griezmann equalized for Barcelona near the hour mark after being set up nicely by Nélson Semedo for the visitors’ only shot on target.
Mertens matched former Napoli captain Marek Hamšík with 121 goals in all competitions for the club — six more than Maradona.
“This result leaves a bitter taste, because we played on level terms and showed sacrifice,” Napoli captain Lorenzo Insigne said. “It was emotional to face Barcelona and Messi for the first time. I just feel we could have had a better result in front of our fans, especially with the chances we created.”
Napoli has reached the Champions League knockout stages for the third time in six appearances but has never progressed further than the round of 16.
Key Barcelona midfielder Arturo Vidal — who deputized in attack amid a shortage of forwards for Barcelona — was sent off in the final minutes after picking up two quick yellow cards, first for a hard foul on Insigne then for physical contact with Mario Rui after play had stopped. Already depleted by injuries, Barcelona will also be without Sergio Busquets in the second leg on March 18 due to accumulated cards.
Also, veteran Barcelona defender Gerard Piqué limped off with an apparent injury toward the end.
Five-time champion Barcelona controlled the game for long stretches in Napoli’s half but created few concrete chances.
“We will have more options in the second leg,” Barcelona coach Quique Setién said. “It’s unlikely a team will be able to defend for that long at Camp Nou. We’ve got to think positive and cannot complain.
“It was difficult to break Napoli down or find the right passing line, as they were always in the way.”
An error from Barcelona left back Junior Firpo led to Napoli’s goal, as Piotr Zieliński took control and surged forward before crossing to Mertens, who unleashed a precise shot into the far, top corner.
After Mertens performed a little celebratory dance, Napoli’s announcer celebrated the goal by yelling the Belgium forward’s first name seven times before the crowd responded with “MERTENS!”
Minutes later, Napoli nearly scored again when José Callejón pulled back for Kostas Manolas, who missed just wide from close range.
Messi — playing in the stadium where fellow Argentina great Maradona achieved some of his greatest exploits — had his best chance nine minutes in when he evaded a crowd of defenders and got off a difficult shot from just beyond the area that missed high.
Before kickoff, fans held up signs featuring an image of Maradona that read “Bienvenido a la casa de Dios” — Welcome to God’s house.
Mertens had to come off following a rough foul from Busquets early in the second half that resulted in a costly yellow card for the midfielder.
But Busquets then provided the through ball that led to Griezmnann’s goal, with Semedo running in behind Mario Rui to set up the France forward. ANDREW DAMPF, NAPLES, AP