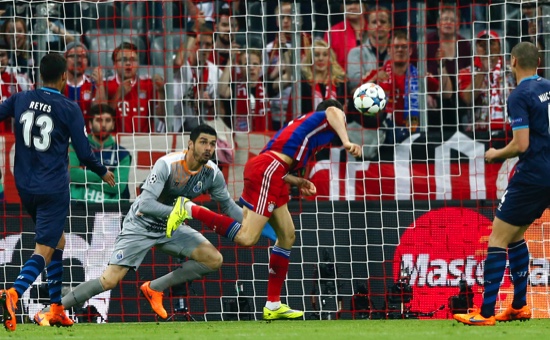 Bayern Munich outclassed Porto 6-1 yesterday to reach its fourth consecutive Champions League semifinal and give coach Pep Guardiola an emphatic victory in his 100th match in charge of the German powerhouse.
Robert Lewandowski scored two goals as the five-time champions roared back from a 3-1 defeat in the first leg last week to advance 7-4 on aggregate.
Thiago Alcantara, Jerome Boateng, Thomas Mueller and Xabi Alonso were also on the score sheet for the home side. Jackson Martinez scored for Porto, which finished the match with 10 men after Ivano Marcano was sent off in the 87th.
Despite missing some of its biggest stars such as Arjen Robben and Franck Ribery, Bayern applied pressure from the opening whistle and had wiped out Porto’s first-leg advantage by the 27th minute.
“It’s easy to love my players now,” said Guardiola, whose position would have come under scrutiny in the German media if his side had made an exit at the quarterfinal stage. “I am the coach of extraordinary players. I didn’t expect such a first half.”
“We can still play better. We lost the ball here and there and we can improve on that. We had a few problems in the second half. They had only a few chances in the second half but you should never relax in the Champions League.”
Guardiola’s team toyed with the dispirited visitors, who began the match by defending with all men in their own half and failed to take a shot at Manuel Neuer’s goal in the opening 45 minutes.
“There are worse situations in life,” said Mueller, who set up two goals and is now Germany’s all-time top scorer in the Champions League with 27 goals. “It was wonderful. It couldn’t have gone better. We never thought we could play such a first half.”
Bayern has now won all five home matches in this season’s competition, scoring 19 goals and conceding one.
In the second match of the night, Barcelona also advanced by beating Paris Saint-Germain 2-0 for a 5-1 win on aggregate.
Porto, which upset Bayern to win the 1987 European Cup title, went into the match undefeated in the competition this season but came away with humiliating loss.
“We didn’t play well in the second half and we conceded an early goal,” Porto coach Julen Lopetegui said. “Bayern is one of the best teams in the world and the favorite to win the title… We knew they would come down the sides and we tried to prevent their attacks but we failed.
“We have to accept it and we can be proud of what we showed in the Champions League.”
Bayern threatened early, with Mueller’s shot after a break was parried by Fabiano. Lewandowski pounced but struck the post in the 10th.
Four minutes later, Bayern took the lead. Juan Bernat beat Ricardo Quaresma on the left wing, got behind Porto’s defense and crossed for Thiago to connect with an unchallenged header.
Porto’s defense was caught short again after a corner in the 22nd minute. Holger Badstuber headed toward the far post and Boateng nodded home as the two big Bayern defenders easily rose above their rivals.
Five minutes later, Bayern took the lead on the aggregate. Philipp Lahm crossed from the right, Mueller put Lewandowski through and the striker headed on target.
Sorely missing suspended fullbacks Danilo and Alex Sandro, two-time winner Porto offered little resistance and Bayern went up 4-0 in the 36th after Mueller picked up a ball outside the penalty area and fired a low shot that deflected of Bruno Martins and caught Fabiano on the wrong foot.
However, the first-half demolition of Porto wasn’t over yet. Mueller tormented the visitors’ defense and won a difficult ball on the right before swinging in a cross for Lewandowski, who took a couple of steps before drilling the ball low into the corner in the 40th minute for 5-0.
Although his team was easily controlling the match, Guardiola was his usual agitated self in the coaching zone and had opened a large rip in the seam of the left leg of his trousers in his 100th match in charge for Bayern. He has 79 wins, 10 draw and 11 defeats.
“I’ll have to buy new ones for the next match,” Guardiola later joked.
Those worries appeared understandable when Porto pulled one back in the 73rd, with Martinez heading home from close range from a cross by substitute Evandro — Porto’s first shot on target.
Shortly afterward, Martinez broke free to shoot low and narrowly miss the net.
In the 88th, Alonso drove in a free kick after Porto had defender Marcano sent off with a second booking for a foul on Thiago.
Bayern can now hope to reach the June 6 final in Berlin, after losing the 2012 final at home to Chelsea.
In Barcelona, Neymar scored two goals as his team beat Paris Saint-Germain 2-0 to seal its return to the Champions League semifinals, joining Europe’s elite four teams for the seventh time in eight seasons. Nesha Starcevic, Sports Writer, Munich, AP