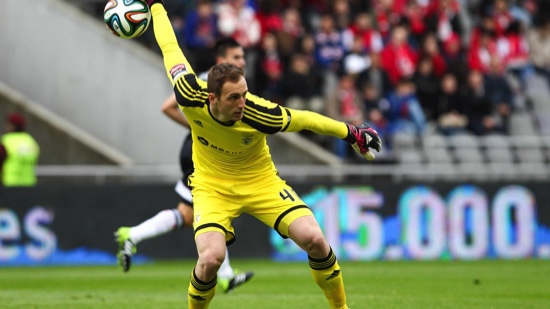 Goalkeeper Jan Oblak made a series of outstanding saves to help Atletico Madrid hold Real Madrid to a 0-0 draw in the first leg of their Champions League quarterfinal yesterday.
In a repeat of last season’s final, cup holder Madrid enjoyed most of the possession and virtually all of the chances – only to leave without a goal and with everything still to do in next week’s second leg at home in the Santiago Bernabeu.
“Well, we have been scoring goals in the Bernabeu recently, so anything is possible,” Atletico captain Gabriel “Gabi” Fernandez said. “It cost us a lot to get into this match and it’s good to have a secure goal. But we’ve got to hang onto the ball more.”
The draw in very windy conditions at Atletico’s Vicente Calderon stadium meant that coach Diego Simeone’s side has been unbeaten in all seven derby matches this season against Madrid – winning four and drawing three.
His team’s excellent defensive record also remained intact. Atletico has not conceded a goal at home in the Champions League since a 4-1 win over AC Milan in March last year.
Juventus beat Monaco 1-0 in Turin in the night’s other first-leg match.
Madrid could have opened the scoring after a free kick in the second minute but Oblak stopped Dani Carvajal’s shot.
Two minutes later, Oblak blocked Gareth Bale’s effort after Atletico defender Diego Godin had failed to make a clearance, and the Atletico keeper followed up by saving Cristiano Ronaldo’s free kick shortly afterward.
Oblak made a spectacular diving save to stop another shot by Bale in the 31st and, after denying both James Rodriguez and Luka Modric before the break, was also kept busy in the second half.
Atletico came out with renewed attacking energy after one of coach Diego Simeone’s renowned halftime pep-talks, and midfielder Arda Turan missed a chance when he headed just wide of the near post in the 49th.
Madrid defender Sergio Ramos was fortunate not to be penalized for unleashing an elbow into Mario Mandzukic’s eye in the penalty area shortly afterward. The Croatia forward had to leave the field three times to receive treatment on a bleeding eyebrow.
After that, Madrid had to cope with increased pressure as Atletico launched several attacks.
“The first half was very different to the second half,” Madrid captain and goalkeeper Iker Casillas said. “In the first half we were the better side but we were denied by some fantastic saves by Oblak. The tie is still open, very open.”
Madrid missed a clear chance when striker Karim Benzema chose to pass to Bale instead of shooting, with the Welshman’s shot being blocked by Diego Godin in the 69th minute.
Madrid coach Carlo Ancelotti, who started with his favored attacking formation of Ronaldo on the left, Bale running up the right flank and Benzema as striker, substituted the France international with Francisco “Isco” Roman in the 76th.
Simeone then brought on Raul Garcia — who has recovered from an arm injury — for Antoine Griezmann, Atletico’s top scorer with 21 goals.
Fernando Torres replaced Jorge “Koke” Resurrecion in the 81st and Atletico could have scored a late winner, only for Mandzukic’s shot to be blocked by defender Raphael Varane.
In the other quarterfinal, a controversial penalty handed Juventus a narrow 1-0 win over Monaco in the first leg, leaving everything to play for in next week’s return match in the principality.
Arturo Vidal scored his first goal of this season’s competition in the 57th minute of an entertaining match after Ricardo Carvalho was judged to have fouled Alvaro Morata in the box. AP