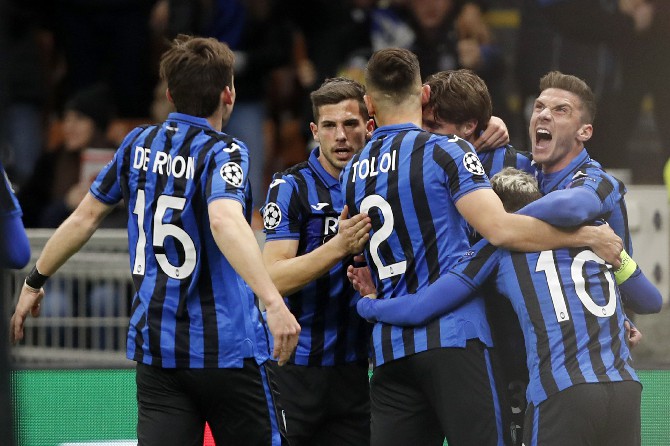 With roughly a third of the population of Bergamo packed into Milan’s San Siro stadium, Atalanta made the journey well worth it for the club’s travelling “home” fans.
Hans Hateboer scored twice as Atalanta beat Valencia 4-1 in the first leg of the Champions League’s round of 16, putting the Italian team on the verge of a quarterfinal spot in its first season in the competition.
“It’s a great result. We did well, the match could have finished with more goals for both teams,” Atalanta coach Gian Piero Gasperini said. “A three-goal advantage is a nice haul but we should have been more concentrated on the chance for their goal, which could have been avoided.”
Atalanta qualified for Europe’s top competition for the first time after a surprise third-place finish in Serie A last season. And it progressed to the knockout stages despite losing its first three matches in the competition.
It is playing its home matches at San Siro as its own stadium didn’t meet UEFA requirements. Bergamo has a population of approximately 122,000 and more than 40,000 had made the 60-kilometer journey.
Josip Iličić and Remo Freuler scored Atalanta’s other goals before substitute Denis Cheryshev netted a consolation goal for Valencia to give the Spanish team a glimmer of hope ahead of the second leg on March 10.
Valencia coach Albert Celades called it “a crushing result.”
“It doesn’t really reflect what you saw on the pitch,” Celades said. “I think there is still a chance to fight back.”
Valencia has only lost twice at home this season in all competitions and beat Lille 4-1 at Mestalla in the Champions League group stage.
“When we play at home against them, we will go out like lions and go for them,” Cheryshev said. “Us footballers live for nights like that. We have to have faith, believe in ourselves.”
But Atalanta — with its free-flowing, attacking style — is also likely to score in Spain. It has netted 63 goals in Serie A this season.
Leipzig, another team playing in the knockout stages for the first time, won 1-0 at Tottenham in yesterday’s other Champions League match.
Atalanta was forced into a late change as defender Berat Djimsiti picked up a knock during the warmup and had to be replaced in the starting lineup by Mattia Caldara.
The home side started brightly and Alejandro “Papu” Gomez sent a free kick narrowly over before Mario Pašalić forced a smart stop from Valencia goalkeeper Jaume Doménech.
Atalanta broke the deadlock in the 16th minute when Hateboer slid in at the back post to turn in Gomez’s cross from the left.
Robin Gosens hit the side netting shortly afterward before Valencia got into the match and almost leveled on the half-hour mark following a quickly-taken free kick, but Ferrán Torres’ effort crashed off the right post.
Valencia went close again when Gonçalo Guedes’ cross-shot flew past Eliaquim Mangala sliding in at the far post.
But Atalanta doubled its lead three minutes from the break as Iličić held off two defenders before firing into the top left corner.
Atalanta dominated from the restart and Freuler extended his side’s lead in the 57th, curling a spectacular effort into the top right corner.
The noise in the stadium was ramped up even more five minutes later when Hateboer ran almost half the length of the pitch before shooting past Doménech.
Cheryshev replaced Guedes in the 64th and pulled one back for Valencia two minutes later, drilling a low shot into the bottom corner to give the Spanish side a glimmer of hope. DANIELLA MATAR, MILAN, AP