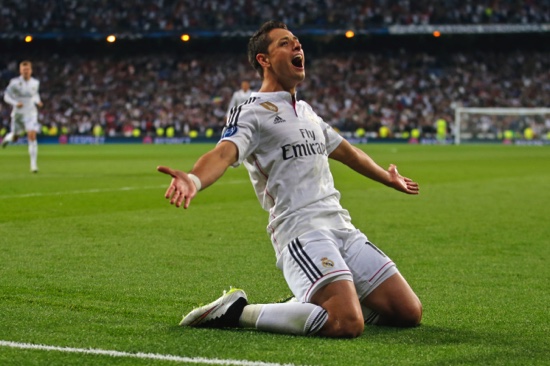 A late goal by Javier “Chicharito” Hernandez gave Real Madrid a tense 1-0 win over 10-man Atletico Madrid and a place in the Champions League semifinals yesterday.
After the first leg of their quarterfinal had finished 0-0 last week, Hernandez missed three good chances to break the deadlock for the cup holders before finding the net in the 88th minute from close range following a pass by Cristiano Ronaldo.
By then, Atletico was down to 10 men after midfielder Arda Turan was sent off for a second yellow card following a rash challenge on Madrid’s Sergio Ramos in the 76th minute.
As in the first leg of the derby between last season’s finalists, Atletico goalkeeper Jan Oblak kept his team in the tie by saving a series of shots on goal by Madrid’s forwards.
In the night’s other match, Juventus drew 0-0 at Monaco to reach the semifinals with a 1-0 victory on aggregate.
The win took pressure off Madrid coach Carlo Ancelotti, who had been criticized for his side’s failure to beat Atletico in all seven of their previous meetings since last season’s Champions League final in Portugal.
“I had wanted a match like this, searching out for offensive solutions without the need for haste, avoiding problems on the counterattack or from set pieces,” Ancelotti said. “In this sense, the team worked well, it controlled the match.”
The coach praised Hernandez’s performances, saying the Mexico forward had played with great commitment.
“He was up for it because I think he’s suffered a lot this season as he’s played very little, and in the end his goal has been very important for us. He never gave up.”
It was a particularly welcome strike for Hernandez, who highlighted the work done by Ronaldo.
“Every goal I score is huge for me. It was a great pass from Cristiano,” said the striker, who dedicated the goal to his teammates “and all those who believed in me.”

And then they were four

The prospect of old friends and foes meeting again has added even more interest to today’s blockbuster Champions league semifinals draw.
Every potential pairing of Barcelona, Bayern Munich, Juventus and Real Madrid — sharing 21 European Cup or Champions League titles, and 16 runner-up finishes — is loaded with history.
Still, two possible storylines stand out.
Bayern coach Pep Guardiola could face former team Barcelona for the first time since leaving in 2012 after a trophy-laden four-year spell included two Champions League titles.
A Barca-Juve pairing would reunite Luis Suarez and Giorgio Chiellini for the first time since the Uruguay forward bit the Italy defender in a World Cup match last June.
First-leg matches are played May 5-6. Return matches are May 12-13. The final is June 6 in Berlin.