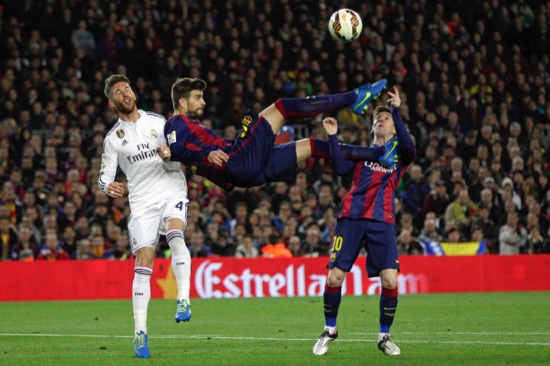 With three teams in the final eight of the Champions League, Spain is again home to the top contenders for Europe’s biggest prize as the quarterfinals start this week.
At least one Spanish team will be eliminated though, with the marquee matchup featuring title holder Real Madrid visiting crosstown rival Atletico Madrid today [2:45am, Wednesday] in a rematch of last year’s final.
A day later Lionel Messi takes his Barcelona to Paris Saint-Germain in their third meeting of the season.
A depleted Bayern Munich side also starts its series at FC Porto tomorrow, while Juventus hosts Monaco today.
Here is a closer look at the first leg of each quarterfinal.

With more stars, more trophies, and more money, Real would appear to be favored over its crosstown rival.
After all, this is a rematch of the 4-1 defeat Madrid dealt Atletico in last season’s final when Cristiano Ronaldo’s club increased its record haul of European Cups to 10.
But don’t forget Madrid was losing that derby until Sergio Ramos equalized in stoppage time. And, more importantly, Atletico is undefeated in all six of their matches with Madrid this season.
Atletico bettered Madrid in both the Spanish Super Cup and the Copa del Rey, and the defending Spanish champions have beaten Madrid twice in the league, including a 4-0 demolition the last time they played in February.
“We are hopeful and motivated, knowing that we haven’t been able to beat them this season,” said Madrid defender Alvaro Arbeloa. “I think we know why. We have players who can change the match and we also play the return leg at the Bernabeu. We hope we can end the streak.”
Atletico will be boosted by the return of striker Mario Mandzukic after two games out with a right foot injury.

Barcelona heads north looking to rekindle a winning streak after it wasted a two-goal advantage to draw 2-2 at Sevilla on Saturday, a result which reduced its lead of the Spanish league to two points over Madrid.
“We can’t make a drama of the draw,” said Barcelona midfielder Andres Iniesta. “We must always be positive and be confident that things will go well.”
Barcelona right back Dani Alves is suspended for the first leg.
PSG faces the tough test of duplicating its 3-2 victory from its first group phase match against Barcelona in September. Barcelona then won 3-1 at Camp Nou.
It will be without suspended striker Zlatan Ibrahimovic, and its defense will be missing injured center backs Thiago Silva and David Luiz as it tries to defend Messi, Neymar and Luis Suarez.

Coach Pep Guardiola called Bayern’s injury situation “critical, very critical” after its 3-0 win over Eintracht Frankfurt on Saturday as it remained on course for another Bundesliga title.
Guardiola had to improvise due to the absences of Arjen Robben, Franck Ribery, Bastian Schweinsteiger, Javi Martinez, David Alaba and Mehdi Benatia.
Bayern chairman Karl-Heinz Rummenigge hopes Ribery and Schweinsteiger will be fit to face Porto.
Porto has been without injured striker Jackson Martinez since early March.
Bayern is bidding to reach its fourth successive semifinal and has never lost in 11 games in Portugal. Porto’s only win over the Bavarian club came in the 1987 European Cup final.

Juventus is seeking a first semifinal appearance since 2003 and will be relying on its home form to get it off to the perfect start against Monaco.
Juventus, which boasts an unbeaten home record against French opponents, has lost just one of 16 European matches at the Juventus Stadium, winning three out of its four matches in Turin this season.
Monaco has never won in Italy and may be without midfielder Jeremy Toulalan because of a left thigh injury. Joseph Wilson, Barcelona, AP / Odds by Betfair