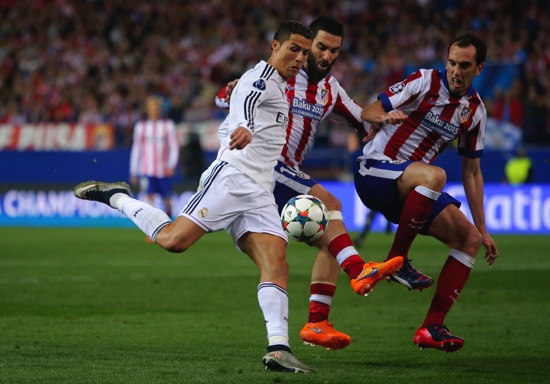 Defending champion Real Madrid faces familiar foe Atletico Madrid for a place in the Champions League semifinals while Barcelona appears to have its place already booked.
The Madrid rivals produced a stalemate in the first leg of their quarterfinal, leaving everything to play for at the Santiago Bernabeu stadium on Wednesday (Thursday, 2:45am) in another rematch of last year’s final.
Also Wednesday, Monaco needs to shake off poor home form for the visit of Juventus after losing the first leg 1-0 in Turin.
Barcelona has one foot in the semifinals with a 3-1 away win over Paris Saint-Germain ahead of the return leg today (tomorrow, 2:45am).
Meanwhile, five-time winner Bayern Munich faces an uphill struggle to reach its fourth consecutive semifinal after losing 3-1 at Porto last week. At least the Bavarian side can count on enthusiastic home support.
Here is a closer look at the second leg of each quarterfinal.

Madrid rarely gets the jitters when playing a big match at home.
But the 10-time European Cup winners will be missing some of their best players on Wednesday when they face the surprisingly daunting task of beating Atletico for the first time in eight meetings this season after defeating their crosstown rivals in last season’s final.
Coach Carlo Ancelotti will be without suspended left back Marcelo and midfielder Luka Modric after he hurt a ligament in his right knee during Saturday’s 3-1 win over Malaga.
Forward Gareth Bale also picked up with an apparent left calf injury in the Malaga match.
Ancelotti hopes to have Karim Benzema back, but the striker rested over the weekend after picking up a knock in training on Friday.
One player Madrid can count on will be Cristiano Ronaldo, who hit the 50-goal mark for the fifth consecutive season against Malaga.
Atletico escaped the first leg with a 0-0 draw thanks to goalkeeper Jan Oblak’s saves. It will be without suspended midfielder Mario Suarez, but forward Antoine Griezmann honed his scoring touch with two goals in its 2-1 win at Deportivo La Coruna on Saturday.

Paris Saint-Germain has a big hole to climb out of if it hopes to advance past Barcelona, but Valencia may have given the side a good blueprint for the daunting task.
Valencia’s intense pressure caused major trouble for Barcelona on Saturday and only their lack of finishing touch kept the visitors from scoring in a match that ended with the deceptive scoreline of 2-0 for the Catalan hosts.
Barcelona eked out the win thanks to goals by Luis Suarez and Lionel Messi, and Luis Enrique’s side will no doubt be favored to eliminate PSG.
After winning the first leg away, Barcelona has advanced in 34 of 36 UEFA ties.
Barcelona will have Dani Alves back from suspension and is hopeful Andres Iniesta can return after hurting his back in the opening leg.

While Juventus moved 15 points clear at the top of the Italian league standing with a 2-0 win against Lazio, Monaco put on another disappointing home showing this weekend in a 1-1 draw with Rennes in the French league.
Bidding for a first Champions League semifinal in more than 10 years, Monaco needs to overturn a 1-0 deficit after Arturo Vidal scored a penalty in Turin.
But playing at home does not make a big difference for Monaco in terms of fan support as their Stade Louis-II ground is often half-empty.
“The atmosphere will be better (against Juve), it will be fully packed,” winger Yannick Ferreira Carrasco said. “It is going to spur us on. And we already proved that we could win here in the Champions League, we did it against Bayer Leverkusen and Zenit. Hopefully we’ll be able to score early, but tactically Juventus is going to defend very well and try to catch us on the break.”

Bayern’s hopes of repeating its 2013 treble were dented by the club’s first loss in Portugal last week, a defeat that has had repercussions off the pitch.
Longtime team doctor Hans-­Wilhelm Mueller-Wohlfahrt and his staff quit the next day, with the 72-year-old saying he had been unfairly blamed for the defeat — a charge refuted by Bayern sports director Matthias Sammer.
Bayern has been coping with a long injury list and there were reportedly disagreements between Mueller-Wohlfahrt and coach Pep Guardiola on the treatment on injured players.
Bastian Schweinsteiger trained Sunday and should be back after recovering from his ankle injury, while Franck Ribery and Philip Lahm are doubtful. There was an injury scare for Juan Bernat in Saturday’s 2-0 Bundesliga win at Hoffenheim but Guardiola said the Spaniard can play.
Definitely out are Arjen Robben, David Alaba, Mehdi Benatia, Javi Martinez and Tom Starke.
Porto will be without suspended defenders Danilo and Alex Sandro. Ciaran Fahey, AP / Odds by Betfair