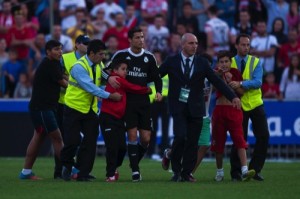 Cristiano Ronaldo set up two goals help Real Madrid set a club record with a 16th straight victory across all competitions on Saturday, while Premier League leader Chelsea failed to score for the first time this season as it stumbled to a scoreless draw at Sunderland in the Premier League.
While Chelsea faltered, Robin van Persie and Wayne Rooney scored to help Manchester United ease to a 3-0 win over Hull.
Also, Zlatan Ibrahimovic and Arjen Robben found the net as Paris Saint-Germain and Bayern Munich earned victories in France and Germany.
SPAIN Ronaldo failed to score for the first time in 12 Spanish league matches this season, but made up for it with his two assists in a 2-1 win at Malaga.
Ronaldo set up fellow stars Karim Benzema and Gareth Bale as Madrid opened up a five-point lead over Barcelona before it visits Valencia.
Benzema put Madrid in front in the 18th minute by redirecting Ronaldo’s cross after the Portugal star had used a step-over dribble to open up a passing angle from the wing.
Ronaldo then headed the ball forward in the 83rd for Bale to score what proved to be the winner with a dipping strike.
Roque Santa Cruz scored Malaga’s goal in stoppage time after Madrid’s Francisco “Isco” Alarcon was sent off with his second booking in the 86th.
Elsewhere, Athletic Bilbao midfielder Benat Etxebarria set up one goal before scoring to secure a 2-1 win at Getafe, while Espanyol fought back for a 2-1 win over visitors Levante under heavy rain for its first win in six games.

ENGLAND Chelsea dropped points for just the third time this season but remained unbeaten after being kept in check by a defensive-minded Sunderland in a 0-0 draw.
Sunderland manager Gus Poyet praised his players for “defending for their lives,” and Chelsea counterpart Jose Mourinho had no complaints about the tactics employed by the hosts.
“To defend well and a lot isn’t a crime,” Mourinho said. “It’s part of the game. It’s strategy. My players tried everything.”
United’s victory ensured the Red Devils will complete a second successive weekend in the top four for the first time since Alex Ferguson retired as manager after winning the 2013 title.
United’s opener came from a surprise source, with defender Chris Smalling scoring his first goal in 11 months. Van Persie hit only his fourth goal of the season in the 66th after setting up Rooney’s fifth just before halftime.
Arsenal and Liverpool are out of the top four despite both posting 1-0 victories. Glen Johnson’s late header enabled 11th-placed Liverpool to overcome Stoke, while Danny Welbeck’s goal at West Bromwich Albion sent Arsenal up to sixth.