Football | Ibrahimovic adapts to mentor role with Sweden after comeback 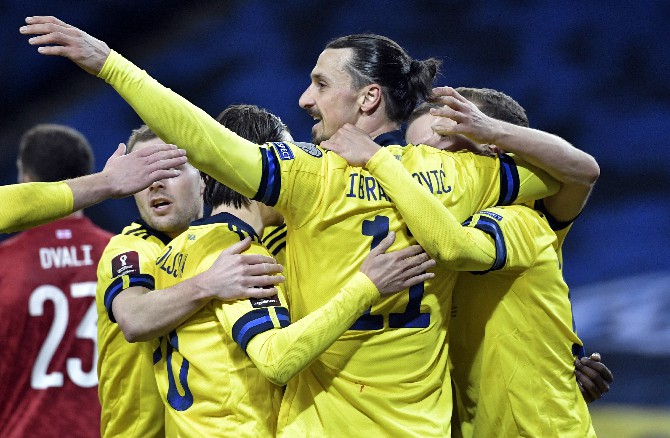 Two starts. Three assists. Six points.
The return of Zlatan Ibrahimovic to international soccer has been a resounding success for Sweden’s national team, even though the AC Milan striker failed to score in either of the wins over Georgia or Kosovo in World Cup qualifying.
At 39 years old, Ibrahimovic is about more than just goals at this stage of his career. He sees himself as a mentor to an exciting crop of young attackers, led by Alexander Isak.
“I told them, ‘I do not have to score goals, I will help you instead,’” said Ibrahimovic, who is no longer the complete focus of Sweden’s attacking game plan like he was before retiring from international duty in 2016.
Fears that Ibrahimovic’s return would affect the balance of the team have so far proved unfounded, with Sweden following up a 1-0 win over Georgia on Thursday with a 3-0 victory at Kosovo on Sunday.
There are much sterner tests to come for the Swedes — notably at home against Spain in their next qualifier in September — but coach Janne Andersson is delighted with how the country’s star player has been reintegrated.
“I am very happy with him and his professionalism in everything he does,” Andersson said. “He is impressive. He does not want us to talk about his age but if we do, I can say that his professionalism is one of the reasons why he is still at this level.
“And it was fun that we could use him better in his own game. It’s fun that he was able to contribute.”
Ibrahimovic, who will be rested for a friendly against Estonia on Wednesday in an effort to manage his workload, started up front alongside the 21-year-old Isak for both of the qualifiers last week. Isak did more of the running — not just in the wide attacking channels but back into midfield to help out defensively — leaving Ibrahimovic to stay further upfield and find areas to worry his opponents.
Ibrahimovic’s hold-up play inside the area was particularly impressive, using his height and close control to bring the attackers around him into play. It was clear that was a specific game plan of Andersson’s.
That was the origin of Viktor Claesson’s winner against Georgia, which came after Ibrahimovic brought down a long ball and turned it back into the middle of the penalty box with his next touch. The opening goal against Kosovo was scored by Ludwig Augustinsson from Ibrahimovic’s acrobatic flick.
His low, square pass to Isak led to the Real Sociedad striker scoring on the second attempt also in the first half, while Ibrahimovic was off the field when Sebastian Larsson converted a penalty to make it 3-0.
“When we hit the long ball … Zlatan is fantastic in that part of the game,” Andersson said. “Neither he nor I care if he scores a goal or not. It just feels very good to have him out there.”
Isak, who looks to have established himself ahead of Marcus Berg, has flaws in terms of his ruthlessness in front of goal and strength on the ball. But he has spoken of the influence Ibrahimovic, Sweden’s record scorer and possibly its greatest ever player, has had on him in only a few days of training.
And that appears to be a key part of Ibrahimovic’s role in the Sweden squad heading into the European Championship.
“I will put pressure on the other players,” he said, “so that they push themselves to perform even more.” AP