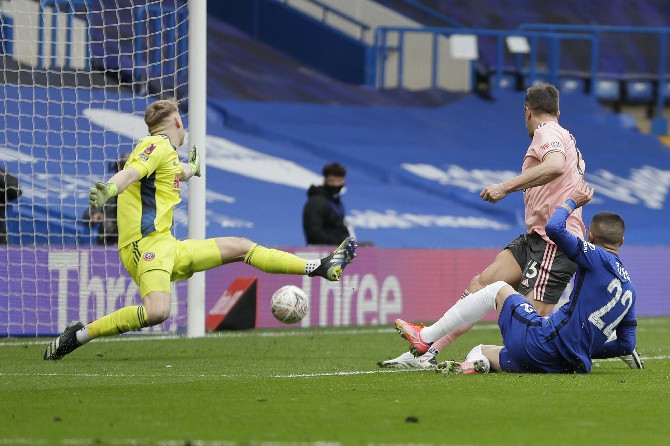 While its neighbor is chasing a quadruple, Manchester United now has only one route to ending a four-year trophy drought.
Losing 3-1 at Leicester in the FA Cup quarterfinals yesterday [Macau time] realistically leaves Ole Gunnar Solskjaer with only the Europa League to produce his first trophy as United manager. United faces Granada in the quarterfinals of the Europa League.
“We didn’t have the spark tonight and it’s understandable,” Solskjaer said. “They’ve been unbelievable, the last three or four months, playing every three or four days, and it’s just caught up with us — all the games, all the traveling. Thursday night in Milan took a lot out of us, today we didn’t have that extra zip. We just didn’t have enough against a good team.”
But with United second in the Premier League, albeit 14 points behind Manchester City, securing Champions League qualification could be the most significant achievement.
It will be lucrative, too, and for Leicester, which is only a point behind United in third.
But while Brendan Rodgers knows the value of steering Leicester back into the Champions League for the first time since Claudio Ranieri’s side won the Premier League in 2016, the status of a trip to a first FA Cup semifinal since 1982 is also notable.
Kelechi Iheanacho’s double and Youri Tielemans’ strike eliminated United, which had leveled through Mason Greenwood. Leicester has the easier route to the final after being drawn to play Southampton.
The other semifinal will pit Man City against Chelsea, which beat Sheffield United 2-0 in Sunday’s other quarterfinal.
“There are lots of teams ahead of us in terms of budget or whatever else, maybe history,” Leicester manager Brendan Rodgers said. “But the ambition is there to win titles and be competitive.”
The FA Cup semifinals next month take place a week before the League Cup final between City and Tottenham. That is Jose Mourinho’s only way of delivering Tottenham’s first trophy since 2008 after the north London club’s elimination from the Europa League last week.
But Tottenham helped its chances of qualifying for the Champions League by beating Aston Villa 2-0 in the Premier League yesterday [Macau time] to move within three points of fourth-place Chelsea.
Tottenham received some assistance from neighbor Arsenal recovering from 3-0 down to draw 3-3 with West Ham, which missed a chance to move level on points with Chelsea after conceding Alexandre Lacazette’s equalizer.
The opener in the 29th minute came after Lucas Moura and Harry Kane played a one-two, resulting in Carlos Vinicius being teed up for a tap-in for his first league goal since joining on loan for the season from Benfica in October.
Tottenham doubled its lead midway through the second half when Kane clinically scored from the penalty spot, having been fouled by Matty Cash.
“The last couple of games have not been good enough in all areas,” Kane said. “We knew we had to bounce back, especially before the international break, we didn’t want to go away with three losses or two losses and a draw, but the boys put in a great shift and we deserved it.
“Our attitude, in the last couple of games that had dropped below our standards, but we are working hard together, all in the same direction.” MDT/AP