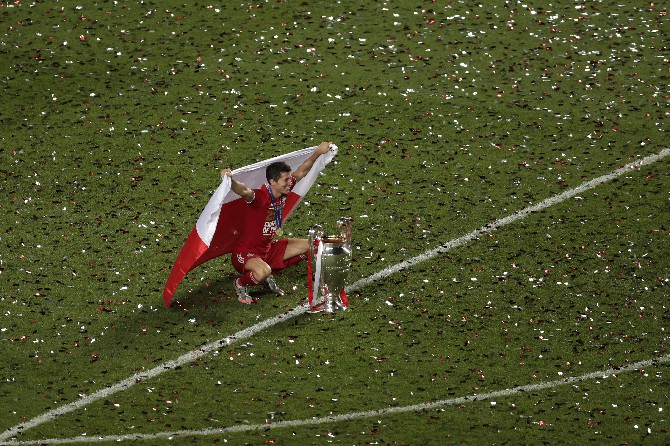 There was no goal or scoring record for Robert Lewandowski, but the Polish striker got to lift the Champions League trophy for the first time.
Lewandowski capped his spectacular season by winning his maiden European title after Bayern Munich beat Paris Saint-Germain 1-0 at the Stadium of Light on Sunday.
It was Bayern’s sixth European title, and first since 2013. That was also the last time Lewandowski had played in the Champions League final, with Borussia Dortmund in a losing effort. He’d reached the semifinals four times with Bayern in between appearances in the final.
“Never stop dreaming. Never give up when you fail. Work hard to achieve your goal,” the 32-year-old Lewandowski tweeted along with a photo of him in front of the trophy while holding a Poland flag.
Kingsley Coman scored Bayern’s winner with a 59th-minute header.
Lewandowski failed to score for the first time in a Champions League game this season, leaving him with 15 goals from 10 matches. He ended two goals shy of Cristiano’s Ronaldo record of 17 in a single season in 2013-14.
Lewandowski has 50 Champions League goals with Bayern and 68 in total from nine seasons, behind only Ronaldo (130), Lionel Messi (115) and Raúl González (71). He ended the season with 55 goals in all competitions.
Lewandowski helped in defense as well yesterday until the end, prompting cheers from his teammates on the field and on bench after a sliding challenge that kept the ball in attack with a few minutes remaining.
“We really make life difficult for the opposition. When you think how we worked defensively until the 92nd minute,” Bayern coach Hansi Flick said. “Lewandowski was chasing after the ball, that was incredible. It was a complete team performance.” TALES AZZONI, LISBON, AP