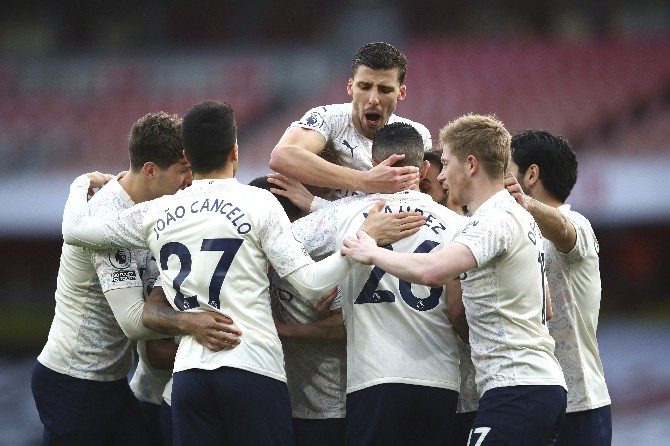 Exactly three months ago, Jose Mourinho’s Tottenham was outwitting Manchester City to go top of the Premier League and leave Pep Guardiola doubting the direction he was taking his slumping midtable team.
On Sunday, Mourinho was downplaying talk of a crisis at Tottenham while virtually ruling out its chances of finishing in the top four, and Guardiola was celebrating an 18th straight win in all competitions as City took a major step toward another league title.
Things are changing fast in the lives of two of soccer’s most storied managers, whose teams are going in opposite directions this season.
City beat Arsenal 1-0 thanks to Raheem Sterling’s second-minute header to preserve its 10-point lead over Manchester United and Leicester, which both also won Sunday.
City’s last defeat in any competition? That 2-0 loss at Tottenham, 26 games ago.
“The run has been incredible,” Guardiola said. “I could not expect it.”
That victory back in November is looking like the high point of a turbulent season for Spurs, who have plunged to ninth place on the back of five losses in their last six games — the latest being a 2-1 defeat at West Ham.
“I wouldn’t say crisis,” Mourinho said. “I would say a bad — a really bad — run of results.”
Mourinho has never done this poorly at a club in his distinguished managerial career, however. After 50 league matches in charge of Tottenham, he has collected 81 points — easily the lowest total from any of the teams where he has been in charge.
It’s even got to the stage where, with three months left of the league season, Mourinho is counting on winning the Europa League to qualify for next season’s Champions League
“In the Europa League, we are alive,” said Mourinho, with Tottenham close to reaching the last 16. “The Europa League is a window of opportunity that is open for us.”
United beat Newcastle 3-1 to stay in second place on goal difference from Leicester, which won 2-1 at Aston Villa.

STERLING’S LEAP
City’s winner at Arsenal came from an unlikely source — the head of Sterling.
With just 80 seconds gone, Sterling evaded Arsenal’s two center backs — Rob Holding and Pablo Mari — and met Riyad Mahrez’s cross with a glancing header inside the far post.
“I’m 5 foot 7 and a half,” Sterling said, “and every time I score a headed goal, it’s an extra buzz.”
In fact, Sterling also scored with his head two weeks ago — but that was from a little more than a meter out in City’s 4-1 win at Liverpool.
City has 13 straight wins in the league and looks unstoppable with 13 games left in its campaign.

SLOPPY UNITED
United was far from convincing in beating Newcastle for just a second win in its last six league matches.
Held 1-1 at halftime after Newcastle winger Allan Saint-Maximim canceled out Marcus Rashford’s opener, United needed a bit of fortune and yet another penalty from Bruno Fernandes to hold onto second place.
A pass across the area from Nemanja Matic was helped on by the studs of the sliding Fernandes and went straight to Daniel James, who buried a shot inside the near post in the 57th.
Fernandes then converted a penalty for his 22nd goal of the season after Marcus Rashford was tripped.

SOLID LEICESTER
Leicester tripped up in the second half of last season to miss out on a Champions League qualification place, but looks in better shape to secure a top-four spot this time.
Goals in the first 23 minutes by James Maddison and Harvey Barnes were enough to see off Villa, which was without captain Jack Grealish because of injury.
Bertrand Traore gave Villa hope by pulling a goal back in the 48th.
Leicester is six points clear of fifth-place Chelsea and has only lost one of its last 12 league games.

THE MOYES EFFECT
West Ham occupies the fourth and final Champions League spot — somewhat unexpectedly — after its win over Tottenham.
Jesse Lingard, rejuvenated after his loan move from Manchester United last month, scored what proved to be the winning goal in the 47th minute after running onto a pass from Pablo Fornals and burying an angled shot with his left foot.
Tottenham had also conceded a goal early in the first half, with fit-again striker Michail Antonio converting a loose ball from close range. Lucas Moura pulled a goal back for Tottenham in the 64th.
West Ham has only lost one of its last nine league games under former Man United manager David Moyes, who continues to rebuild his coaching reputation at an east London club that is more often found fighting against relegation. AP