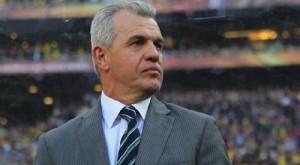 Japan has appointed Mexican Javier Aguirre as the new head coach of the national team.
The Japan Football Association made the appointment yesterday, with the 55-year-old Aguirre replacing Alberto Zaccheroni, who coached the team to a disappointing group-stage exit at the World Cup.
Aguirre guided Mexico to the round of 16 at the World Cup in 2002 and 2010, and most recently was coach of Spanish club Espanyol last season, with the Barcelona club finishing 14th.
Aguirre’s first task will be to prepare Japan to defend its title at the 2015 AFC Asian Cup in Australia in January, and then qualification for the 2018 World Cup.
The length and financial terms of the contract have not been disclosed. Aguirre will come to Japan in the middle of August to formally conclude the deal.
His first game as Japan manager will be Sept. 5 in a friendly against Uruguay at Sapporo Dome, with another game against Venezuela at Yokohama’s Nissan Stadium set for Sept. 9.
Zaccheroni stepped down after Japan was eliminated from the World Cup following a 2-1 loss to Ivory Coast, a 0-0 draw to 10-man Greece and a 4-1 thrashing by Colombia.
In five trips to the World Cup, Japan has only advanced to the knockout stage twice — when they co-hosted the tournament in 2002 and in 2010. AP