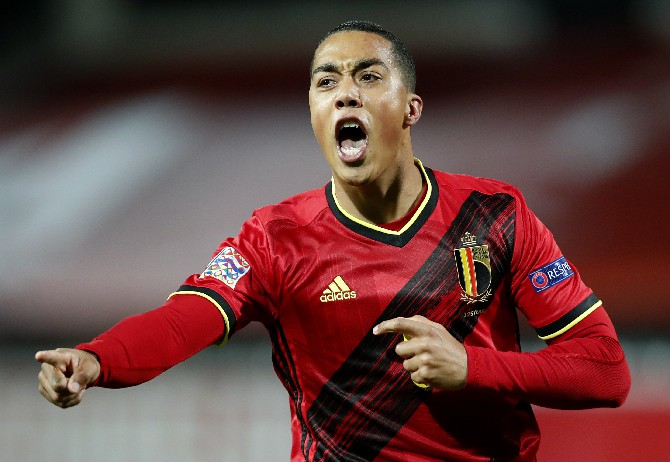 Dries Mertens scored a superb free kick as a resilient Belgium ended England’s hopes of reaching the Nations League finals with a 2-0 win yesterday [Macau time].
With one round of games left, Belgium has a five-point lead over third-place England in the top tier’s Group 2 but has not yet secured qualification. Top-ranked Belgium will host second-place Denmark on Wednesday with a place in the finals next year at stake. A draw will be enough for Belgium, which leads Denmark by two points.
Held without fans because of coronavirus restrictions, the match got off to a promising start with both teams determined to play with intensity. England pressed high throughout and enjoyed long spells of domination but lacked efficiency in the final third. Belgium, in contrast, defended well and had that finishing touch.
“I’m very satisfied to keep a clean sheet against a team like England,” Belgium coach Roberto Martinez said.
Belgium took the lead in the 10th minute after captain Jan Vertonghen made the most of a loose pass from Eric Dier to recover the ball and ignite a quick move. Romelu Lukaku set up Youri Tielemans, whose low shot from the edge of the box took a deflection, hit the post and ended in the back of the net.
Harry Kane, making his 50th appearance for England, was dangerous throughout. He came close two minutes after England had conceded but his goal-bound header was cleared off the line by Lukaku.
Mertens made it 2-0 with his 21st international goal. After Kevin De Bruyne won a free kick close to the area in the 23rd minute, Mertens expertly curled his kick above the English wall — which mostly failed to jump — and lodged the ball into the left corner.
England coach Gareth Southgate called the free kick “a turning point” and said he did not think it should have been awarded.
“They are a top team who defended very well,” Southgate said. “In a top-level game we had a fair proportion of chances at goal. I can only praise the players who were here tonight.”
With a 2-0 lead, the hosts then let the opposition have the ball as England pushed hard to pull one back but could not find a cutting edge.
England continued to apply pressure in the second half and still wasted chances, notably from set-pieces. Despite enjoying possession and winning nearly all the duels in midfield, England remained ineffective. Kane’s low effort was stopped by Belgium goalkeeper Thibaut Courtois following a good combination near the hour mark, shortly before Aston Villa midfielder Jack Grealish fired over the bar from inside the area.
“We were dominant. We were unlucky to concede the two goals,” Kane claimed.
Belgium finally created its first second-half chance with 15 minutes left following a team move between De Bruyne, Mertens and Lukaku, only for Lukaku to shoot straight at England goalkeeper Jordan Pickford.
Inter Milan striker Lukaku had another chance to add more luster to the win but shot wide at the conclusion of a fast counterattack in added time. AP