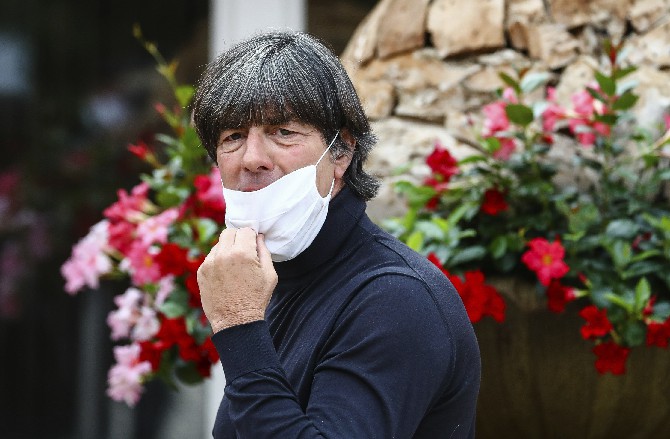 Europe’s national teams will play their first games of 2020 when the UEFA Nations League campaign starts this week in stadiums without fans.
Kicking off with a meeting between recent World Cup winners Germany and Spain today [Macau time], and ending next Tuesday with a rematch of the 2018 final between France and Croatia, there is plenty of high-quality matchups on the program.
Still, few would be surprised if some of the 54 games scheduled over six days can’t be played.
Players on the 55 national teams flying around the continent face mandatory pregame tests for COVID-19, with UEFA rules giving local authorities power to quarantine people and shut down games.
Paul Pogba is already missing, left out of the French camp last week after a positive test.
UEFA has back-up plans to draw lots to determine the result if a game can’t be played and neither team is to blame.
A team judged at fault for a game being canceled can be forced to forfeit a 3-0 loss, which has already happened in Europa League and Champions League qualifying. Those UEFA rulings have been challenged at the Court of Arbitration for Sport.
The stakes are arguably higher now as 2020-21 Nations League groups feed into European qualifying playoffs for the 2022 World Cup in Qatar.
UEFA is the only soccer confederation using this upcoming international window for games, with the rest having postponed their schedules because of the pandemic.
The inaugural Nations League two years ago was a clear success as the group stage produced competitive games between teams of a similar level instead of unpopular friendlies.
It also let UEFA spread hundreds of millions of euros (dollars) from unified commercial deals among member federations.
This time, the most influential countries wanted more games, and so the groups for the highest-ranked teams in League A have been expanded from three teams to four, playing six games each. That also saved Germany and Croatia from relegation to League B.
UEFA has retained the format of having the four League A group winners advance to a mini-tournament the next year hosted by a participating team. Host Portugal won the first trophy in June 2019.
However, with the 2020 European Championship having been rescheduled to next June-July, it is unclear when the Nations League final four can be staged. The schedule for 2021 must also include World Cup qualifying games.
The final Nations League standings will send two teams into UEFA’s World Cup qualifying playoffs planned for March 2022.
With the new season delayed by the pandemic, the national team games will be staged before many domestic leagues have even begun. The English Premier League and Spain’s La Liga start on Sept. 12.
Germany hosting Spain in Stuttgart is the pick of opening night, when Ukraine and Switzerland play in the same group.
The revived Netherlands team hosts Italy on Monday without coach Ronald Koeman after his move to Barcelona. Poland and Bosnia-Herzegovina complete the group.
Top-ranked Belgium opens at Denmark on Saturday in the same Copenhagen stadium where they will meet next June at Euro 2020. England’s visit to Iceland will be the first meeting between the two since England’s embarrassing exit at Euro 2016.
France’s group also includes European champion Portugal, and they will play a rematch of their Euro 2016 final at Stade de France on Oct. 11. GRAHAM DUNBAR, GENEVA, AP