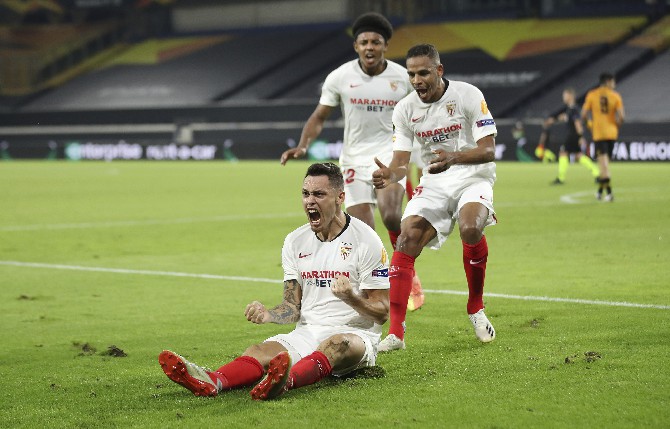 One missed opportunity was all it took to end Wolverhampton’s long European run.
Raul Jimenez stepped up to take an early penalty against Sevilla yesterday’s [Macau time) quarterfinal, just as he’d done to beat Olympiakos in the previous round. This time, though, his shot was too central and saved by Yassine Bounou.
Sevilla dominated the rest of the game as Wolves increasingly tired in their 59th game of a long season. A goal seemed inevitable and Lucas Ocampos delivered with a header in the 88th minute to secure a 1-0 win.
The loss ended Wolves’ best European run since reaching the UEFA Cup final in 1972 — and its chances of qualifying for the Champions League. Sevilla, meanwhile, stayed on course for a record-extending sixth title in the competition. Manchester United is next up in the semifinal Sunday.
“We knew we had to work a lot and I think my team has played a great game, exactly the game we expected,” Sevilla coach Julen Lopetegui said through a translator. After the penalty save, “we had the control over the game.”
Sevilla had 73% possession and seemingly endless second-half set pieces around the Wolves penalty area — so many that the grass around the six-yard box was thoroughly churned up as players jostled for position. They finally broke through when Ocampos met Ever Banega’s cross with a glancing header.
“I think it’s justice, that goal,” Lopetegui said.
Wolves forward Adama Traore earlier showed extraordinary pace in his 54th club game of the season to sprint in behind the Sevilla defense, only for Diego Carlos to cut him down with a tackle from behind for the penalty. Jimenez had 27 goals for Wolves in 2019-20 and scored against Olympiakos last week. His shot this time was within easy reach for Bounou, who said he knew Jimenez’ penalty-taking style from their time together at Atletico Madrid in 2014-15.
“I don’t think we can blame Raul. He’s given us so much this season,” Jimenez’ Wolves teammate Leander Dendoncker said.
After the penalty, Wolves didn’t have another shot on target.
Traore’s speed has been pivotal in many of Wolves’ games this season but it was a non-factor after the opening half-hour and the increasingly weary right-sided forward was later substituted.
Wolves had the longest Europa League campaign of any team left in the competition, having started more than a year ago in the first qualifying round with a win over Northern Irish club Crusaders on July 25, 2019.
“It’s a long journey. We wanted to go as far as we could. We had it today really, really close. Of course everybody’s disappointed, but we should not ignore all the effort. It’s almost 14 months of hard work,” Wolves manager Nuno Espirito Santo said. “Disappointment is something that cannot take away all the good things that we’ve been doing.”
Sevilla’s semifinal opponent Manchester United beat Copenhagen 1-0 on Monday after extra time. The second semifinal next Monday pits Inter Milan against Shakhtar Donetsk, which beat Basel 4-1 in the other quarterfinal.
All four semifinalists have already secured places in the 2020-21 Champions League group stage through their national leagues. That means that the group-stage spot allocated to the Europa League winner will pass to Rennes because it finished third in the French league. JAMES ELLINGWORTH, DUISBURG, AP