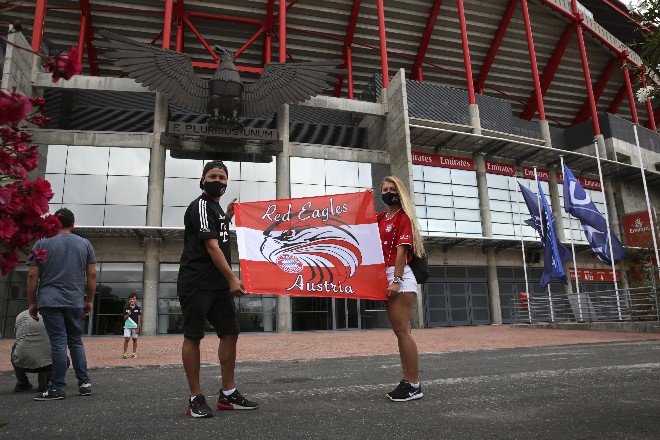 Seen as an example for the rest of Europe, Portugal successfully controlled the coronavirus pandemic — and earned the right to host the world’s most important club soccer tournament.
Portugal will take the center stage from today when eight of Europe’s best teams start fighting for the coveted Champions League title amid strict health protocols.
Thanks in part to its handling of the pandemic, Portugal was chosen by UEFA to stage the mini-tournament in two Lisbon stadiums over the next two weeks. Despite the country’s success, there will be no fans for this week’s quarterfinals, next week’s semifinals and the Aug. 23 final.
Portugal avoided the problems that hit other southern European countries such as Italy and neighboring Spain, where the known combined COVID-19 death toll surpassed 63,000.
There have been fewer than 2,000 registered deaths in Portugal, which took quick action when the pandemic started to hit nearby countries and even though only a few cases had been reported locally.
“We are only able to host these Champions League matches because of the good behavior of the Portuguese people in the fight against the pandemic,” Portuguese Football Federation president Fernando Gomes said.
“The matches will be seen by hundreds of millions of people, helping to underline and reinforce the positive image that Portugal has given the world during a period that has been particularly difficult and demanding for everyone.”
The final was originally scheduled to take place at Ataturk Olympic Stadium in Istanbul. Madrid was among cities which also wanted to host the reshaped mini-tournament.
Portugal, a country of 10.3 million people with an economy that relies heavily on tourism, saw a surge in outbreaks that raised concerns a few weeks ago and prompted the return of some restrictions in some places. But the numbers came down again recently and have been mostly under control in the run-up to the Champions League knockout stage.
There were also concerns when Spanish club Atlético Madrid reported two positive cases in its squad ahead of its trip to Lisbon. The entire team had to be tested again and the club was cleared to travel only after negative results came back.
None of the other seven clubs involved in the quarterfinals have reported positive tests among players.
In Lisbon, they will have to comply with UEFA’s 31-page return-to-play protocols for international matches. Players will be tested before departure for a host city and a day before games. Anyone who has had either a coronavirus diagnosis or “any suspicious symptoms or contacts” will be subject to pulmonary function testing and, in severe cases, “organ-dependent examinations.”
The venues are Benfica’s Stadium of Light and Sporting Lisbon’s Alvalade Stadium. TALES AZZONI, LISBON, AP