Football | Premier League preview: Man United on the march, Southampton on the slide 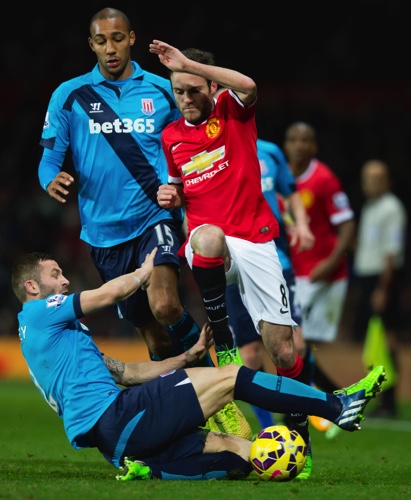 The established order is gradually being restored in the Premier League. Southampton is on the slide and Manchester United is on the march.
When the sides meet on Monday, United can further derail Southampton’s improbable top-four ambitions. A fifth successive victory would consolidate United’s revival under Louis van Gaal and take third place off Southampton.
“We have got that belief back,” United defender Chris Smalling said. “We are really dominating games and creating a lot chances.”
Not since Alex Ferguson retired in May 2013 after delivering United’s 20th English title has the team spent this long — two weeks — in the top four. Returning to the Champions League is the target.
“We know each other a lot better, we know the manager and the staff, we know the philosophy of the manager,” said midfielder Marouane Fellaini, who is also enjoying a personal revival under Van Gaal.
Initially this season, it appeared that Ronald Koeman was the manager making a greater impact in his first season in English football. After a remarkable start, the last week has been sobering for the Dutchman, with a 3-0 collapse against Manchester City followed by a 1-0 loss at Arsenal on Wednesday.
“It is a bit cruel but we can hold our heads high,” Southampton goalkeeper Fraser Forster said.
Here is a look ahead to the rest of the weekend’s action:

COSTA RETURNS. In easing past Tottenham 3-0 on Wednesday, Chelsea backup strikers Didier Drogba and Loic Remy seamlessly filled the void left by Diego Costa’s suspension with a goal each. After being troubled by injuries, the break might have been a welcome for the team’s top scorer, who has contributed 11 league goals in his first season at Stamford Bridge.
Defensively, Chelsea is also strong, going into Saturday’s match against Newcastle unbeaten at the top, having kept clean sheets in their last three league games.

CITY’S CHASE. Unbeaten since October, Manchester City manager Manuel Pellegrini believes the champions are “returning to the performances we had last season” after cutting Chelsea’s lead to six points. Pellegrini, though, will have to cope again without Vincent Kompany at Everton on Saturday as his captain recovers from a hamstring injury.
After City came from behind to beat Sunderland 4-1 on Wednesday, Pellegrini said: “If we continue playing this way, of course, we will fight for the title.”

GERRARD DILEMMA. Brendan Rodgers faced scrutiny for putting 34-year-old Liverpool captain Steven Gerrard on the bench for last weekend’s victory over Stoke. The Liverpool manager may have the same dilemma seven days on against Sunderland.
With important games coming up against FC Basel in the Champions League on Tuesday and then Manchester United, Rodgers must decide whether Gerrard is up to starting four games in 13 days.
The midfielder started against Leicester on Tuesday, scoring the second goal in a 3-1 win as Liverpool went eighth.

ELSEWHERE. Arsenal fans can revive their “One-Nil to the Arsenal” chant. Slender victories over West Bromwich Albion and Southampton have pushed the London club to within two points of the top-four.
The clean sheets have come despite manager Arsene Wenger having to use third-choice goalkeeper Emiliano Martinez while Wojciech Szczesny and backup David Ospina recover from injuries.
“Hopefully I will get more opportunities,” Martinez said ahead of Saturday’s match at Stoke.
In Saturday’s other games, Queens Park Rangers and Burnley meet, with both teams hoping to climb out of the relegation zone, Tottenham hosts Crystal Palace, and West Bromwich Albion is at Hull.
On Sunday, bottom-place Leicester travels across the Midlands to Aston Villa, and fifth-placed West Ham hosts Swansea. AP / Odds by Betfair