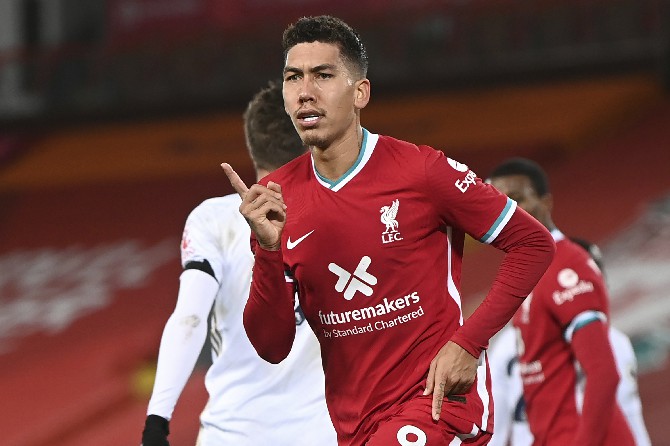 Liverpool set a club record of 64 top-flight home matches unbeaten by overwhelming Leicester in a 3-0 win in the Premier League yesterday.
Diogo Jota had a record of his own, becoming the first player to score in his first four home top-division league appearances for Liverpool with a glancing header to add to Jonny Evans’ own-goal in the first half.
Roberto Firmino made amends for hitting the post twice by scoring the third in the 87th minute from a corner as Jürgen Klopp’s side — undefeated in the league at Anfield since April 2017 — eclipsed the great team of the late 1970s and early 1980s, whose own run was coincidentally ended by a Leicester team in 1981.
Fabinho’s return after a three-match absence not only eased Liverpool’s injury worries but soothed any anxiety at the back as he slotted into central defense with a calm, assured performance usually associated with Virgil van Dijk, who is out long-term through injury.
With Liverpool’s absentee list also including Mohamed Salah, Jordan Henderson and Trent Alexander-Arnold, Leicester — with its 100% record away from home — and its former Liverpool manager Brendan Rodgers would have fancied their chances of a first win at Anfield in over 20 years.
However, the hosts were well worth their 2-0 lead at halftime.
Jamie Vardy, the scourge of the top teams, barely had a touch of note and never really had the chance to test Fabinho’s newly healed hamstring or Joel Matip’s lack of pace.
Instead, it was another livewire forward in Jota who took center stage, occupying the wide-right position usually the preserve of Salah.
The summer signing roamed in off the flank to cause Leicester all kinds of problems, and he was duly rewarded with his goal just before the break.
When he headed in a cross from Andy Robertson, it was his seventh goal in his last six club matches and gave Klopp’s side a cushion after Evans had headed James Milner’s corner past his own goalkeeper at a corner.
The evergreen James Milner, 35 in January, deputized for the absent Alexander-Arnold and did not put a foot wrong in keeping Harvey Barnes quiet while also offering an outlet down the right. That was until he was moved into midfield after Naby Keita was added to the casualty list with a hamstring injury.
Milner’s versatility is an obvious asset in these tough times and his first act in his more advanced position was to release Sadio Mane, whose shot was parried by Kasper Schmeichel and Christian Fuchs was needed to bail him out by heading over from under the crossbar with Jota lurking.
Jota tested the keeper again and Evans headed against his own post as Liverpool should really have been out of sight before the hour mark.
Leicester failed to capitalize on the introduction of 19-year-old Neco Williams at right back for Liverpool, and even when Alisson Becker did make a good double save from Vardy and Barnes, any goal would have been ruled out for offside.
Liverpool hit the post twice within seconds as Firmino’s shot rebounded, was cleared off the line by millimeters, and Mane’s follow-up strike deflected off Schmeichel and onto the upright.
Firmino’s persistence eventually paid off as Liverpool moved level on points with Tottenham at the top of the table, behind only on goal difference. AP