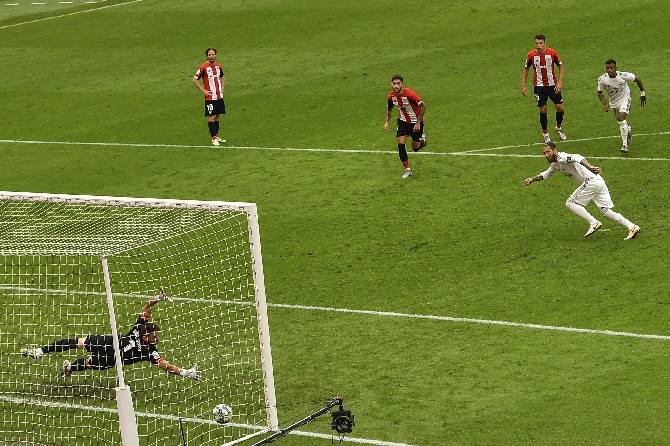 The closer Real Madrid gets to the Spanish league title, the stronger the accusations it is benefiting from the referees.
Its opponents are not holding back, and Madrid has heard enough.
“I’m tired of always talking about the same thing,” Madrid coach Zinedine Zidane said after the 1-0 win at Athletic Bilbao yesterday [Macau time]. “It seems like we only win thanks to the referees, and that’s not true. Real Madrid and its players deserve respect.”
The victory kept Madrid as the only team with a perfect record since the restart. It was the team’s seventh straight win since the league resumed, leaving it four points ahead of second-place Barcelona with four matches left.
When asked if Madrid was in the lead only thanks to VAR, Barcelona president Josep Bartomeu didn’t do much to dismiss the insinuation.
“Our results haven’t been good, obviously, but it’s true that in many games VAR hasn’t been fair and has always favored one team,” Bartomeu said after the team’s 4-1 win at Villarreal. “Many teams are being hurt by this.”
Madrid’s win over Athletic came with a controversial 73rd-minute penalty awarded by video review after left back Marcelo was stepped on by a defender inside the area.
It was the latest in a series of VAR decisions that have gone Madrid’s way following the break caused by the coronavirus pandemic.
Madrid had another one moments after it scored on Sunday, as Sergio Ramos stepped on an Athletic player away from the ball inside the area but the referee let the game continue despite loud complaints by the hosts.
“We’ve already noticed which way these decisions are going in these last few rounds,” Athletic captain Iker Muniain said. “Everyone can reach their own conclusions.”
Barcelona’s players and coach Quique Setién had already been sending messages of criticism against some of the decisions going Madrid’s way, but it was the first time Bartomeu spoke more bluntly about it.
“This is the best league in the world but VAR is not working as it should be working,” Bartomeu said. “In the last few weeks everyone has seen that VAR has not really been fair.”
Barcelona had the lead when the league was interrupted, but relinquished it after drawing three of its last seven matches.
“If someone has made a mistake and has not achieved his goals, he has to have some self-criticism and look at his own players and at his own squad,” Ramos said before Bartomeu’s comments. “You can’t give credit to the referees for what Madrid has been achieving.”
Atlético Madrid coach Diego Simeone was not among those thinking Madrid has been getting the benefit of the doubt on VAR decisions.
“Mistakes can be made, but VAR is fair with everyone,” Simeone said. “A team like Madrid will have more penalties go its way because it attacks more than other teams do.”
Atlético is 15 points behind Madrid, which resumes its quest for its first league title in three years when it hosts relegation-threatened Alavés on Friday. Barcelona hosts last-place Espanyol on Wednesday in a Barcelona city derby. TALES AZZONI, MADRID, AP