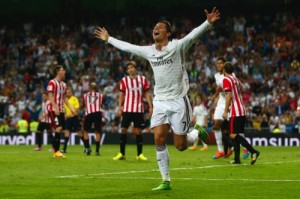 Cristiano Ronaldo’s third hat trick of the season put him at the top of the AP global football 10 yesterday.
Ronaldo scored three goals in Real Madrid’s 5-0 rout of Athletic Bilbao, taking his goal tally to 13 in only six appearances this season.
“Player of the week has to go to Ronaldo again, scoring at a frankly ridiculous rate,” James Porteous of the South China Morning Post said. “His third hat trick (this season) saw him equal the La Liga record for hat tricks with 22.”
Lionel Messi, last week’s winner, dropped to third place after scoring once in Barcelona’s 2-0 win over Rayo Vallecano. Arjen Robben was second after scoring twice in Bayern Munich’s 4-0 win over Hannover.
Chelsea was the top-rated team after beating London rival Arsenal 2-0. A penalty from Eden Hazard, fifth in this week’s player poll, and another strike from Diego Costa handed the Blues three points in a match that will also be remembered for Chelsea manager Jose Mourinho being pushed by Arsenal counterpart Arsene Wenger.
“Chelsea deserve the top spot as they beat Arsenal and confirmed they have the quality, the organization and the maturity to be successful,” Aurelio Capaldi of RAI Sport in Italy said. “Arsene Wenger lost twice against Jose Mourinho: on the field where Chelsea were better on every aspect of the game and on the bench when the Arsenal manager pushed Mourinho who keeps beating him.” 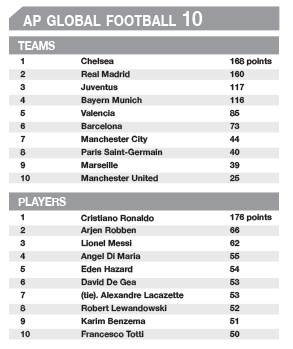 Real Madrid was only eight votes behind in second, while Juventus was third after extending its winning start in the Italian league to six matches by beating Roma 3-2. Also, Bayern Munich was fourth and Barcelona was sixth.
In the player vote, only five points separate fourth and 10th. Angel Di Maria is one position behind Messi after scoring once and assisting on another in Manchester United’s 2-1 win over Everton.
Di Maria is joined in the top 10 by United teammate David De Gea, who saved a penalty before making two fantastic stops in the final minutes of the game.
“David De Gea was a crucial help for Manchester United in their win against Everton,” Cedric Rouquette of Eurosport in France said. “Without him, Louis van Gaal’s team would still struggle for some credit.”
De Gea is tied with Alexandre Lacazette in sixth. Lacazette scored a hat trick as Lyon beat Lille 3-0. Jack Bezants, AP