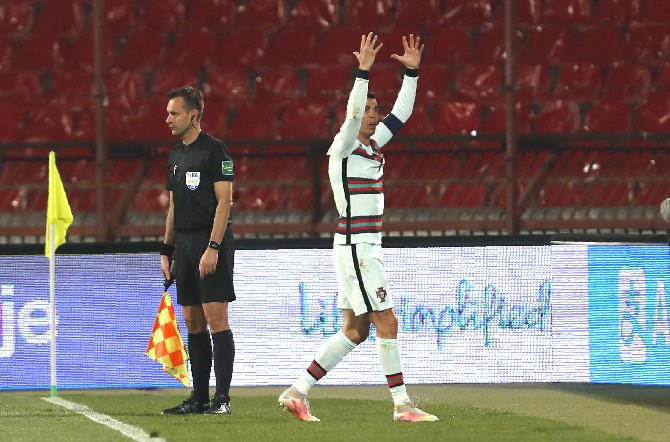 Cristiano Ronaldo ripped off his captain’s armband and tossed it onto the field as he stomped off in disgust after Portugal’s 2-2 draw at Serbia in World Cup qualifying yesterday [Macau time].

In a split second, Ronaldo had gone from savoring a last-gasp winner for his country to protesting what he considered a clear refereeing oversight with no video review available.

The Portugal star came oh-so-close to scoring a stoppage-time goal when Serbia defender Stefan Mitrovic slid and swept the ball to apparent safety though TV replays indicated it was a goal.

For Ronaldo, the ball had completely crossed the line. For Dutch referee Danny Makkelie it had not, and he rewarded Ronaldo’s complaints with a yellow card.

The incident will no doubt be used by fans of video review to argue for the use of VAR in qualifying matches for the world’s most important soccer tournament.

Juventus forward Ronaldo made a veiled reference to the incident in a social media posting after the match.

“Being captain of the Portugal team is one of the greatest sources of pride and privileges of my life. I always give and will give everything for my country, that will never change. But there are difficult times to deal with, especially when we feel that an entire nation is being harmed. Lift your head and face the next challenge now!” Ronaldo wrote in Portuguese on his Instagram account.

For 10-man Serbia, it was the perfect ending to an inspired fightback from a two-goal deficit.

For Diogo Jota, Portugal should have done more with the two goals he scored in the first half.

“It looked like the hard part was done, but then they changed the system in the second half, scored quickly, and built on from there,” Jota said. “At 15 minutes into the second half, we have already let Serbia draw. We had to kill the game.”

Serbia and Portugal were left with four points each atop Group A.

Luxembourg is next with three points after it stunned Ireland with a 1-0 victory in Dublin. That left Ireland and Azerbaijan with zero points.

Portugal looked ready to roll to a convincing win after Jota scored with two headers.

The Liverpool forward got Portugal going in the 11th with a run to the left post where Bernardo Silva found him with a perfectly placed cross. Ronaldo helped by drawing in three Serbia defenders before laying off for the unmarked Silva on the right side of the box.

Serbia tried to respond through runs by left back Filip Kostic and the playmaking of midfielder Dusan Tadic. But the hosts never seriously threatened Anthony Lopes’ net before Jota made it 2-0.

This time it was for right back Cédric to send a cross to the heart of the box where Jota separated from Nikola Milenkovic and sliced a glancing header off the post and into the net in the 36th.

But Serbia got back into the match after coach Dragan Stojkovic made two changes at halftime.

Substitute Nemanja Radonjic needed less than a minute to pass for Aleksandar Mitrovic to head home and set a Serbia national team record with his 39th international goal.

Serbia pressed for an equalizer, and Lopes was eventually beaten in the 60th when Serbia mounted a counterattack, with the ball flowing forward from Tadic to Radonjic, who played Filip Kostic clear to slot the ball home. MDT/AP