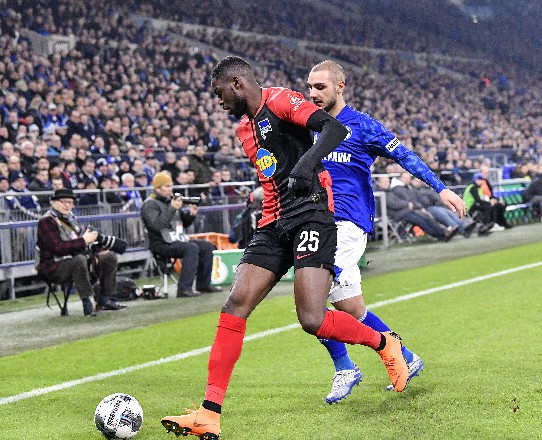 Schalke is investigating racist abuse from fans aimed at Hertha Berlin player Jordan Torunarigha during a German Cup game, the club said yesterday.
Schalke said it would work with police to look into the situation.
The German defender, the son of former Nigerian player Ojokojo Torunarigha, was sent off when he picked up a second yellow card in extra time in Tuesday’s match after appearing increasingly upset as the game went on.
Hertha teammate Niklas Stark said he heard “monkey noises and racist insults” and called on German soccer to support Torunarigha.
“It was hard to miss, after the game and before extra time, how he looked and that he had been distressed by it,” Stark said in comments on Hertha’s website.
Schalke won 3-2 to reach the quarterfinals.
“There is no tolerance from the club for behavior like this. We will do everything to trace those responsible for this and to ensure they face the consequences,” the Schalke board said in a statement. “Behavior like this does not just go against FC Schalke 04’s stadium regulations, mission statement and statutes, but also contradicts all of our values.”
Hertha coach Jürgen Klinsmann said he felt abuse played a role in Torunarigha’s red card and that the referee should have taken his emotional state into account when considering a second booking.
Schalke coach David Wagner said he didn’t hear racist abuse but offered an apology on behalf of Schalke to Torunarigha and to Hertha. AP