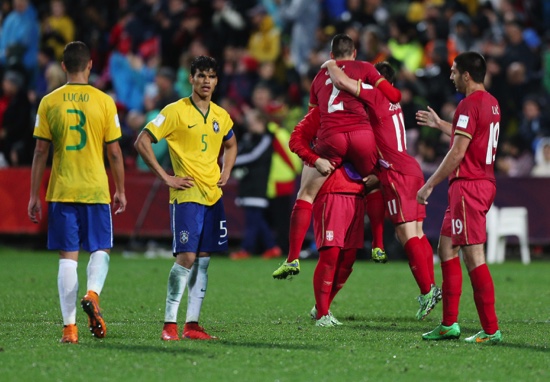 Nemanja Maksimovic scored late in extra time to give Serbia a surprise 2-1 win over Brazil on Saturday in the final of the Under-20 World Cup. The match seemed headed for a penalty shootout when Serbia counterattacked in the 117th minute and Stefan Ilic combined with Andrija Zivkovic to put Maksimovic in behind the defense and he calmly slotted his low shot past goalkeeper Jean.
The victory, and Serbia’s first title as an independent nation, owed much to goalkeeper and captain Pedrag Rajkovic who pulled off a series of saves to repeatedly deny Brazil the victory.
“I can tell you we were lucky,” Serbia coach Veljko Paunovic said. “But luck is a part of the game and you have to deserve to be lucky. At the end I believe the team that wanted to win most would win this trophy and we got it.”
Brazil entered the final having gone 502 minutes without conceding a goal but that ended 70 minutes into the final when Stanisa Mandic swept home Maskimovic’s cross at the far post to give Serbia the lead.
Brazil equalized within two minutes as Andreas Pereira weaved past defenders before curling in a shot for a superb goal, but the favorites could not find a second throughout the remainder of regulation and extra time as Rajkovic stood tall in goal.
Brazil’s “next generation” was chasing a sixth U20 title. Before the match, influential Brazil midfielder Gabriel Boschilia said the team was “trying to restore the image of Brazilian football” after the senior team’s 7-1 loss at home against Germany in last year’s World Cup semifinals.
“The world lost a little respect for our country’s players after what happened at the 2014 World Cup, so we want to show them that we can still produce the goods,” he said.
Brazil coach Rogerio Micale consoled his players individually after the match and urged them not to give up on their task of rebuilding Brazilian football.
“I believe they were an example today and throughout this tournament with what they did and with their professionalism,” Micale said. “I am very proud of this team. They are a great generation and I will be proud when they play for the national team.” Steve McMorran, Auckland, AP