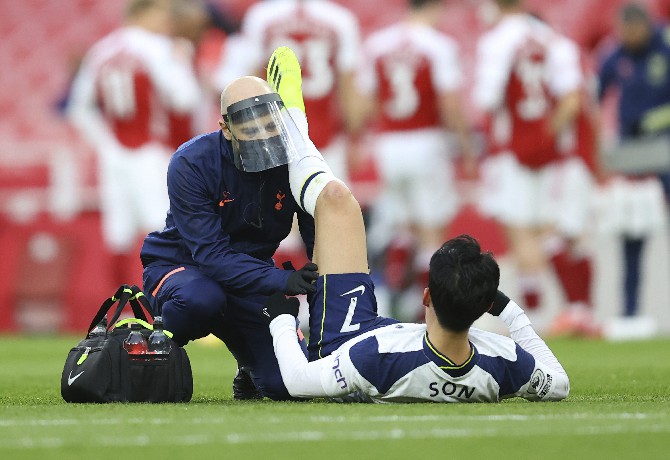 Just hours after injuring a hamstring in Tottenham’s 2-1 loss to Arsenal in the Premier League, Son Heung-min was selected by South Korea to face Japan in an international friendly on March 25.
South Korea coach Paolo Bento told a news conference yesterday that Son, if fit, would join South Korea’s squad in the Japanese city of Yokohama.
“We will have to wait to find out the extent of his injury and the test result,” Bento said.
Tottenham coach Jose Mourinho was unable to give an indication in the immediate wake of this weekend’s loss of when the 28-year-old forward would be fit to return to action.
“It’s muscular. Muscular is always not easy,” Mourinho told reporters, but Son, “is a guy who normally recovers very, very well from any kind of injury.”
The national team selection could be further complicated by regulations in place for the COVID-19 pandemic. Clubs are usually obliged to release players called up on designated international match days but, according to rules introduced by FIFA in February, can refuse if players will face quarantine periods of more than five days.
As an elite athlete and returning from a country not on the British government’s ‘red-list,’ however, Son would be exempt from quarantine requirements in Britain.
Bento is also waiting to find out if German team RB Leipzig will release forward Hwang Hee-chan. Lee Kang-in of Valencia is set to make the trip.
There has been criticism in South Korea over the decision to play the friendly in the midst of a global pandemic.
In November, the national team visited Austria to play Mexico and Qatar and, during the training camp, four players tested positive to the virus. South Korean team officials are confident there’ll be no repeat of that this time.
“We conducted a thorough safety review and our medical team will be much better prepared than in November,” Bento said. “We don’t have much time to train before World Cup qualification and I am just trying to make the best of the situation I have.”
South Korea and Japan are preparing for the resumption of Asian qualifiers for the 2022 World Cup in June. The most recent games in qualifying were in November 2019. JOHN DUERDEN, SEOUL, MDT/AP