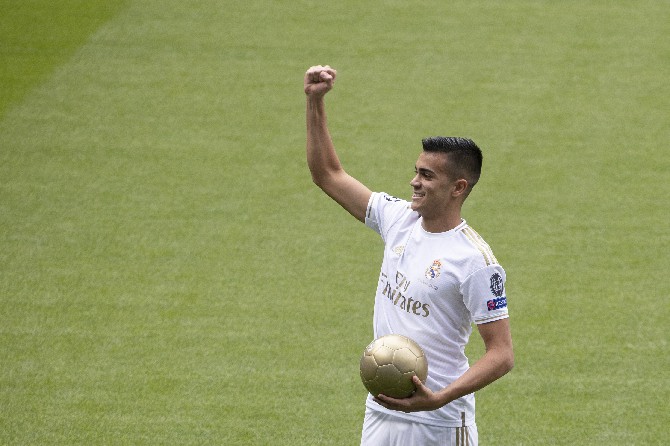 Brazilian teenager Reinier couldn’t hold back the tears when he was officially introduced by Real Madrid late yesterday.
The 18-year-old Reinier had to compose himself a few times while speaking about his family’s sacrifice to help him make it to the Spanish club. He also cried when the club showed a video of his highlights with Brazil’s youth squads and former club Flamengo.
“It’s thanks to my family that I’m here,” Reinier said, wiping away tears. “It was hard to leave everything behind when I was young just so I could play.”
The sacrifice has been justified, for now. For a reported fee of more than 30 million euros ($32.5 million), Reinier has signed with Madrid until 2026. He is expected to initially play for the B team.
“I’m available to do whatever the club wants me to do,” he said. “I’ll always be giving my best.”
His parents and one of his sisters were at Santiago Bernabéu Stadium for the presentation. Reinier did a few tricks on the field and kicked balls to the few hundred fans in attendance. His mother cried when Reinier entered the field, and his father shed tears when Reinier’s highlights were shown.
Reinier is the third Brazilian teen signed by Madrid in recent seasons, following Vinícius Júnior and Rodrygo. Vinícius Júnior also played for Flamengo. The transfers for each of them reportedly reached nearly 45 million euros. Both also were initiated in the B team before making it to the main squad.
“They all welcomed me very well,” Reinier said about his new Brazilian teammates, who also include Casemiro, Marcelo, and Eder Militão. “I was already at Vinícius’ home yesterday.”
Club president Florentino Pérez said they were welcoming a player who used to pick Madrid as his team in video games, and whose father used to show him videos of Madrid great Zinedine Zidane, the team coach.
Like Vinícius Júnior when he was signed, Reinier has played only a few matches as a professional, though enough to impress Madrid.
Reinier is a creative attacking midfielder who has been touted as one of the most promising youngsters in Brazilian soccer. He helped Flamengo last year win the Brazilian league and the Copa Libertadores.
This month, he helped Brazil Under-23s qualify for the Tokyo Olympics, wearing the No. 10 jersey.
Reinier said one of his idols was Kaká, the former Brazil and Real Madrid player. He also looked up to Zidane. Reinier won’t need to watch videos anymore. TALES AZZONI, MADRID, AP