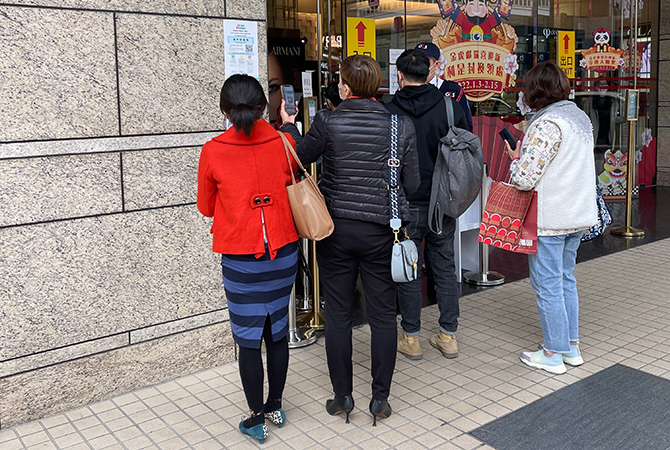 Footprint recording will become mandatory on January 15, contrary to the government’s promise of a gradual rollout, the Times was told recently.

Yesterday, a local supermarket started requiring customers entering the establishment to scan the government-provided QR code to record their footprints. When the supermarket staff were told that, according to the government, QR check in is still voluntary for the time being, a staff member replied, “Next time you come here, it will be mandatory.”

She added that “the footprint recording action will be required from January 15.”

On Monday, Secretary for Social Affairs and Culture, Elsie Ao Ieong, told the press that “the government will [continue to] observe the situation before gradually implementing mandatory itinerary registration [footprint recording] when [the public] becomes familiar with the function.”

“[This action] is encouraged [voluntary] and is not mandatory,” Leong said at the press conference, adding that venue operators may register entrants’ information “with pen and paper.”

The supermarket admitted customers who declined to conduct footprint recording. However, the security guards at a local department store were instructed to block customers who refused to record their footprint.

This inconsistency raises concerns about the public education concerning the scheme, if they will not be able to enter commercial establishments without using the function.

To former lawmaker Au Kam San, the decision to block customers was incomprehensible, since he thought commercial establishments would be more concerned with the convenience of their customers. “It’s rare that the commercial sector does more than the government requires,” Au said.

He questioned whether this was an appropriate time to make the recording action mandatory, when the city is relatively calm in terms of the Covid-19 pandemic condition. “The [anticipated] rollout of mandatory footprint registration contradicts the government’s effort in promoting Macau as a safe tourism destination to Mainland tourists,” Au pointed out. “Making [footprint recording] compulsory at this time may trigger a fear among Mainland tourists that Macau has new cases or has become less safe.”

In contrast, lawmaker Ron Lam said that he personally accepts the requirement. He cites a legal argument in support of his position. Lam said he does not see that these commercial establishments are breaking any laws by requesting that their customers scan the footprint recording codes.

However, Lam added that in actual practice, the scanning of the codes must incur certain problems, which both the public and the government should address.

An inquiry has been sent to the Health Bureau, regarding its response to commercial stores making footprint registration mandatory. The bureau said that the matter will be addressed at the regular press conference today.