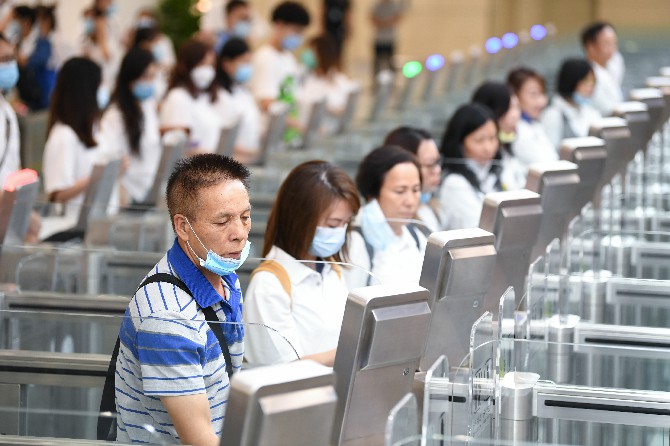 Yesterday, Secretary for Security Wong Sio Chak confirmed that foreigners will need a valid Chinese visa to enter the Guangdong-Macau Intensive Cooperation Zone in Hengqin.
The comment came after Tuesday’s confirmation on the mainland jurisprudence over commercial disputes in the Cooperation Zone by Secretary for Economy and Finance, Lei Wai Nong.
Wong stressed that immigration policies and thus visa requirements are national policies. He added that for the time being, no change had been announced so the policies in effect are prevalent, although mainland China was still barring foreign entrants.
The security official’s comment was made in response to journalists’ questions during the last session of the media briefing series on the Cooperation Zone.
In contrast to other land border checkpoints, the Hengqin Border Checkpoint has a visa application room for foreigners to apply for a visa on site, a practice similar to visa-on-arrival applications at airports.
“This is a convenience measure for foreigners who want to enter mainland China through Hengqin, where they can apply and obtain their Chinese visas at one stop,” Wong explained, adding that the service is now suspended due to border closure to foreigners.
On the topic of Macau-registered vehicles entering Hengqin, the security official reiterated that it is an existing policy.
Macau drivers, who are aged 18 and above and hold a mainland driving license, are eligible to apply for a permit to drive their cars to Hengqin. As of Tuesday, the authorities have approved 6,777 such applications. The remaining quota is 3,223.
In the future, the vehicle channels at the Border Checkpoint will be expanded to ideally handle a maximum of 43,000 vehicles per day. A total of 30 channels – half in and half out – have been designed.
The one-queue ID clearance mode used at the Hengqin Checkpoint to handle travelers will be extended to the vehicle channels later on. Vehicles will only need to queue up once to clear ID checks for both Macau and the Mainland.
Meanwhile, smart technologies will be hired to pre-filter vehicles that are not eligible to use or cross the Hengqin Checkpoint prior to their reaching the channels, so as to avoid congestions at the clearance points.
Wong added that for the time being national policies do not allow motorbike entries to Hengqin from Macau.
Yesterday’s session was co-presided by Secretary for Transport and Public Work Raimundo Arrais do Rosário.
The Cooperation Zone’s presentation which focused on the transport and public works sector was made by Lam Wai Hou, director of the Infrastructures Development Office (GDI).
Lam recapped that the government is building a Light Rapid Transit (LRT) extension to Hengqin, which is 2.2km long. Two stations have been planned, including a separate but connected station at the existing Lotus Checkpoint Station and an underground station below the Hengqin Border Checkpoint.
The railway is designed as partly aboveground and partly under. The tunnel will go under the river between Hengqin and Cotai.
Considering the LRT system’s Hengqin extension having part of the track near or under an ecological reserve between Macau and Hengqin, Rosário was questioned whether the work and the transport system will have impact on the reserves and, more particularly, the bushes of mangroves on the coast of Cotai.
The public works official assured the press that the government had commissioned or conducted an environmental assessment on the situation. The conclusion is that the constructions will not have an impact on the ecological reserves.
Lam introduced that the designed mode of the extension line has four carriages per train, with each carriage carrying up to 476 passengers every time. Every hour, the extension line will be able to handle a maximum of 8,568 passengers.
The extension line will facilitate passenger connections between the Macau LRT and the Mainland high-speed railway network.
Meanwhile, Lam also revealed that a set of overpasses will be built to connect the northeastern corner of the University of Macau with the Hengqin Border Checkpoint to divert the flow of traffic for both vehicles and humans.