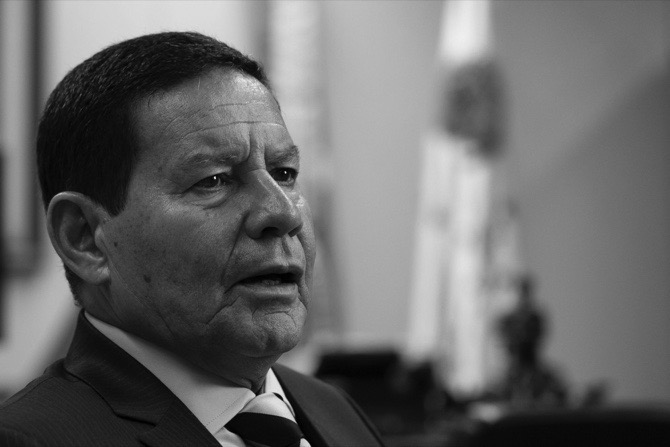 The government of Brazilian President Jair Bolsonaro wants to strengthen and expand trade ties between Brazil and China, which is the message that Vice President Hamilton Mourão will give to Chinese President Xi Jinping at a meeting scheduled for Friday, 24 May, in Beijing.

“China is of fundamental importance to us as it is the engine of the world economy […] accounting for more than a third of the world’s gross domestic product,” said Mourão in an interview given to Macauhub in Brasilia.

The Brazilian vice president recalled that China is a major importer of food, and Brazil is a major producer of these products, “so we have demand on the one hand and supply on the other, which creates a strategic partnership.”

Mourão told Macauhub that, in addition to the commercial issue, the Brazilian government intends, in the year in which Brazil and China celebrate 45 years of diplomatic relations, to establish a relationship of trust with the Chinese.

Another important theme of the meeting will be the “New Silk Road,” a global project in which the Chinese government plans to invest about USD1 trillion (MOP8.08 trillion) in infrastructure projects in different parts of the world, including Asia, Europe, the Middle East and Africa.

According to Mourão, Brazil is hoping to receive a proposal for the country’s participation in this initiative.

“We have a critical interest,” he said, explaining that the investment should be applied “to what we consider important to us and not only to what is important to them but will be of mutual benefit.”

Mourão is due to meet with his counterpart, Wang Qishan, on Thursday, 23 May, for the meeting of the Fifth Plenary Session of the Sino-Brazilian High-Level Commission for Coordination and Cooperation (Cosban), a mechanism that is traditionally headed by the vice presidents of the two countries and had been at a standstill since 2015.

In March, Mourão attended the meeting in Brasilia, which relaunched the work of the commission, originally established in 2004, and the vice-president is of the opinion that this platform must be strengthened in order to align and organize the portfolio of projects and investments between the two countries, which involves the interests of state and municipal governments.

Over the last ten years, China has been Brazil’s main trade and economic partner, with a cumulative amount of direct investment of over $70 billion for the period from 2003 to March 2019, according to the Foreign Investment Bulletin published by the Ministry of Economy.

Most of the Chinese projects are concentrated in the energy and infrastructure sector, which is the area that, according to Mourão, remains the focus of interest in Brazil for the Asian partner’s resources, whether in logistics, roads, roads railways, or ports.

Mourão noted that the huge potential of renewable energies in Brazil, especially in the wind segment, is an opportunity for Chinese capital.

“We could have a ‘Green Belt and Road,’ with massive investments in Northeastern states, to harness wind and solar energy, which could really help that region in economic terms,” he said.

Among the projects of interest to Brazil, the Vice President said, are the Transoceanic Railroad, which will link the Atlantic oceans in Brazil and the Pacific in Peru, over a distance of more than 4,000 kilometres.

Mourão said the project is in the national interest and would benefit the Mercosur region in general, becoming a major factor of integration and facilitating the flow of exports to China, noting that “we will negotiate this project, which I think is very important to Brazil.”

In addition to working to expand trade with China, Brazil wants to change the investment profile, focusing on projects with higher added value and employing Brazilian workers. “Because we export iron ore and receive steel back, so we have to change this reality.”

Brazilian President Jair Bolsonaro is scheduled to visit China next August and is due to meet Xi Jinping and three months later the Chinese President is due to travel to Brasília for the BRICS summit meeting, a group that includes Brazil, Russia, India, China and South Africa, scheduled for 13 and 14 November. MDT/Macauhub