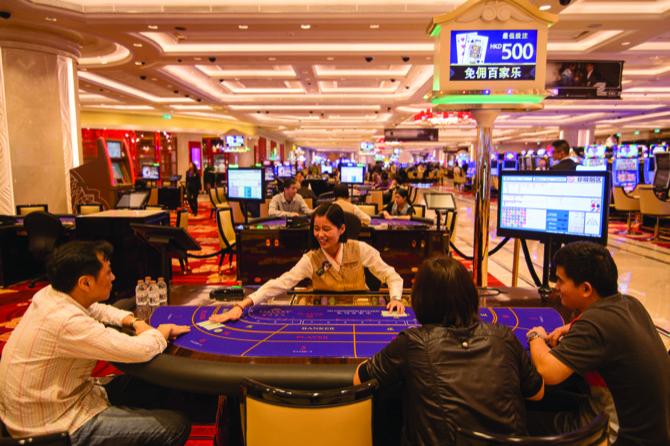 The Macau SAR government’s goal of having casino operators draw a minimum of 9 percent of their revenue from non-gambling sources by 2020 is looking increasingly implausible, data from the latest Statistics and Census Bureau report on economic diversification show.

According to official data released Friday, 2017 was a disappointing year for those charged with driving economic diversification. As the deadline outlined in the government’s first Five- Year Development Plan inches one year closer, the proportion of non-gambling revenue from total industry receipts amounted to just 6.8 percent, marking a slight reversal from the gains seen in the previous two years.

Macau’s six gaming concessionaires brought in a combined revenue of MOP284.77 billion in 2017, with that of gaming activities accounting for MOP265.44 billion – or 93.2 percent – according to the 2017 Analysis Report of Statistical Indicator System for Moderate Economic Diversification of Macau, released on Friday. That’s up from the 92.6 percent share drawn from gambling activities in 2016 and  little change from 2015.

A Wall Street Journal report earlier this year examined the Macau and Las Vegas experiences in developing a non-gaming side to casino operators and found that the former had seen only marginal improvement in the past decade.

It took Las Vegas just ten years from the opening of its first integrated resorts for non-gaming revenue to become the casino operators’ major source of income. 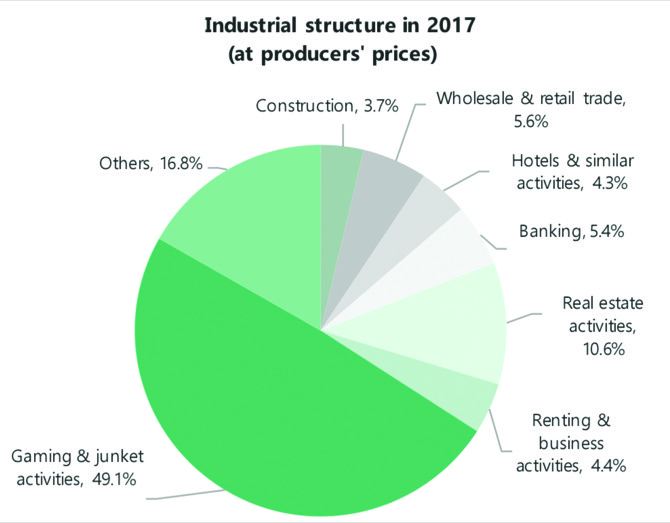 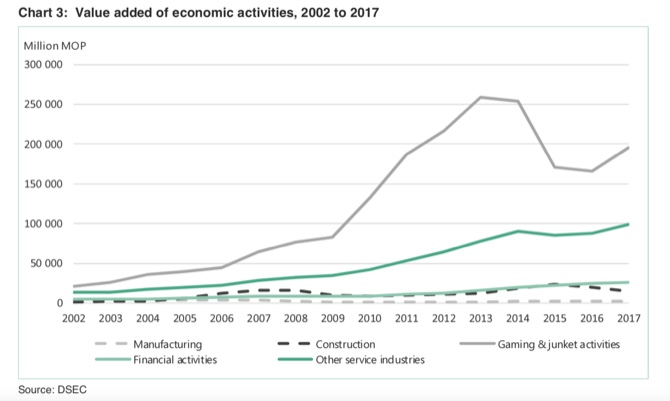 The dominance of Macau’s gaming sector grew almost 2.5 percentage points year-on-year in 2017 to reach a proportion of 49.1 percent, reversing the improvement seen in the previous year when the share of economic output declined by about 1.4 percentage points from 2015. The dominance of the sector still remains significantly behind that of the pre-recession peak in 2014 (58.47 percent).

The gaming sector also continued to be the engine of economic growth in Macau in 2017, with its own expansion outpacing that of the general economy. Gross value added of all economic activities expanded by MOP41.37 billion or 11.6 percent year-on-year, with the gaming sector rising 17.5 percent and non-gaming industries growing 6.4 percent.

The VIP share of total gambling revenue in 2017 was only a few percentage points below the 60 percent level seen between 2012 and 2014, when the precariousness of Macau’s “monotonous economic structure” was first exposed.

The Statistics and Census Bureau report also considered other measurements for gauging the extent of economic diversification in Macau, including changes to the source markets of inbound visitors.

But here, too, little change has been observed.

Between 2014 and 2017, the source market composition of inbound tourists to Macau remained virtually unchanged, with the exception of visitors from South Korea, which grew from a 1.76 percent share of the total in 2014 to 2.68 percent in 2017.